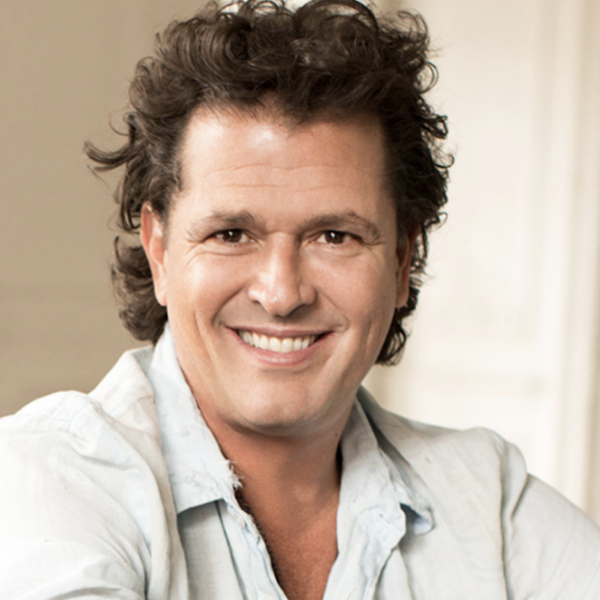 Singer, composer, actor and entrepreneur, Carlos Vives is one of the most emblematic artists of Colombia and one of the most important figures in Latin music. With more than 20 million albums sold around the world, he is considered a pioneer of the new Colombian and Latin American sound.

He was the first Colombian artist to win a Grammy Award and, to date, has taken home two Grammys and 11 Latin Grammys. Some of his great songs are: The Cold Drop, Let Me In, Fresh Fruit, Pa ‘Mayté, I Was Born Again, The Land of Oblivion, Dancing with You, and the hit, The Bicycle, with Shakira.

2017 was a year full of success for Carlos Vives. He performed 78 shows in 18 countries around the world, playing more than 962 hours live, and selling approximately more than half a million tickets. His hits are heard on digital platforms of music for more than 15 million monthly listeners.  They have surpassed two billion streams and has more than three million active users. On social networks, his followers surpass 26 million people.

Vives also presented at the Grammys Museum with a special exhibition of clothes, objects and instruments that have marked his career. He received the Ondas Award from Spain for his contribution to Latin American music and was honored with the Icono de los Musa Awards recognition entering the Hall of Fame of Latin composers.

With regard to prizes, Carlos Vives added nine nominations to the Billboard Awards for The Bicycle; four to the Lo Lo 2017 Awards, in which he won with the single of the year, a nomination to the Youth Awards; and two nominations to the Heat Awards. Other 2017 highlights: Best Tropical Artist (won), Best Andean Region Artist (won) and receiving the Gold Award for his career of more than 25 years.

2017 closed for Carlos with Sony Music for the launch of his video clip entitled Robarte un Beso. The artist and the company won the “Most Effective Mobile Campaign of the year” at the Mobile Marketing Awards 2017. In addition, the song was the headline of the most important playlists of Spotify, Deezer, Apple Music, Tidal and Youtube among others. He reached the top positions in the billboard charts and position number one on radio in Colombia, USA, Costa Rica and Ecuador among others.