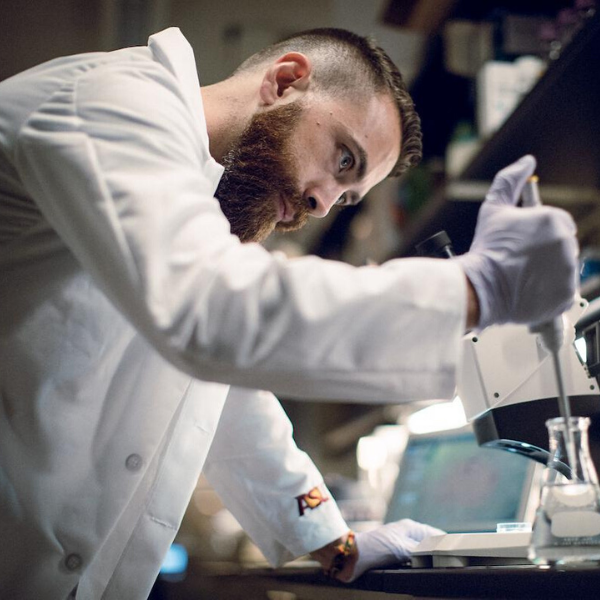 Dr. Charlie Rolsky is Director of Science for Plastic Oceans International; while also serving as the Director of Research for the prestigious Shaw Institute in Blue Hill, Maine, where he conducts contaminant monitoring, marine mammals health surveys, and research on plastic pollution. He serves as the host of Breaking It Down, a YouTube series from Plastic Oceans in which he simplifies science in a fun and engaging way. He received his PhD from Arizona State University (ASU), where he conducted groundbreaking research at the ASU Biodesign Center for Environmental Health Engineering. His work focused on  marine and aquatic plastic pollution, a major concern within many ecosystems and environments around the world. Their identification, fate and impact are only now beginning to be understood, and Charlie has developed several analytical tools to help improve this further. He collaborated with ASU’s Fulton School of Engineering on several microplastics projects, in addition to many groups worldwide, including Plastic Oceans. He also works on using non-invasive research methods to collect species health information, including fecal samples from wild species like killer whales. Having this information provides significant knowledge pertaining to stress, reproduction and overall species health.

Charlie is an author of new marine microplastics research that finds “plastic waste has been documented in nearly all types of marine environments and has been found in species spanning all levels of marine food webs.” The report was published in the journal Environmental Science and Technology on June 6, 2019: The Vertical Distribution and Biological Transport of Marine Microplastics Across the Epipelagic and Mesopelagic Water Column.

Charlie’s report explanation: “This important research is troubling for many reasons. It uncovers how deeply plastic fibers are able to penetrate the water column. We were previously concerned that plastic fibers would reach the stomachs of important biota, such as the abundant red pelagic crabs. The data confirm that fear, meaning plastic fibers are moving up the food chain. I grew up in those waters, and it hits very close to home to think of how contaminated they are. We must change our consumer habits to end plastic pollution.”