Breaking It Down: Balloons Present a Major Threat to Birds and Other Wildlife

If your birthday was this month.

I hope it was filled with joy, fun, and balloons which remained stationary … or better yet, no balloons at all.

Why do I bring it up? Balloons are a very unique object. Before inflating them, we can’t simply throw them on the ground. That would be littering. But fill them with helium and releasing them into the sky somehow makes it not littering?

“But Charlie, balloons are made from rubber” 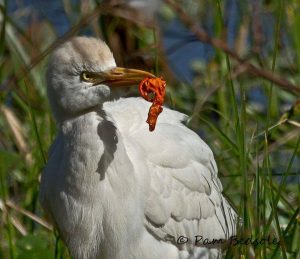 An egret eating the remains of a balloon. Photo: Pam Bedsole

That’s true, many of them are. Regardless, here are a few scary details regarding their presence as litter.

Recently, I have been working with Rep. Mitzi Epstein and Girl Scout Troop 3835 as they have introduced a bill here in Arizona which would limit the release of balloons into the air. Those caught doing so would be ticketed and would have to pick up trash as a result. This is a great reminder of what communities can accomplish when they work together for a common cause. If you ever see something like this that you wish to change, contact your local representatives and see what you can make happen!

Until we meet again, happy birthday, and please keep those balloons tied up.

PLEASE DONATE TO OUR MISSION TO RETHINK PLASTIC

Charlie Rolsky is Director of Science, North America, for Plastic Oceans International. He is also the host of “Breaking It Down, With Charlie Rolsky” – a new YouTube series from Plastic Oceans that simplifies the science, while having a bit of fun. He conducts research at Arizona State University’s (ASU) Biodesign Center for Environmental Health Engineering where he works on marine and aquatic plastic pollution, a major concern within many ecosystems and environments around the world.