Q & A with Filmmaker Sara Newton

Sara Newton is a force of nature. She has travelled the world and has had a career track that most wouldn’t believe. She is the writer, director, and producer of Big Litter Ocean, a mockumentary that takes a satirical and dry-witted look at the problem of plastic pollution in our oceans. Plastic Oceans International is proud to present this short film that reminds us all to not take ourselves too seriously and to do our best to #begood. We had a chance to talk with her recently about all things Sara Newton and this is the result:

PO: Plastic pollution in the ocean is a pretty serious issue. What made you decide to do a mockumentary on the subject?

SN: I moved onto a boat to ‘live the dream’ and I started seeing the plastic, with my own eyes, in the marina. The street drains do go into the ocean btw. Then I began playing a game with myself: ‘no plastic for one week’. Watching myself fail and succeed woke me up. I saw it. All the plastic I used and tossed. I watched all informative things. A Plastic Ocean was one of them. I said, ‘I can make a film – I can be a droplet in the ocean of awareness and I can make something different. 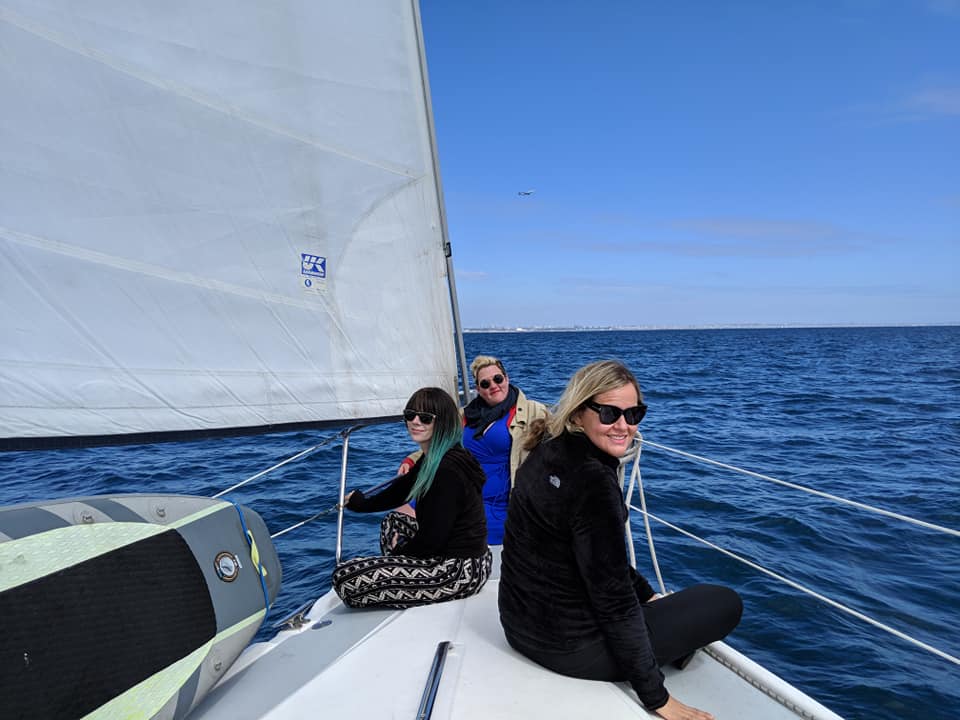 PO:  When did you form Newton Films and what is its mission?

SN: I formed Newton Films in 2017 (under another name, AL.) Today it’s simpler: It’s about the messages I want to leave behind – big or tiny, with my work. I’m an entertainer first and a filmmaker second; I want to relate to people. Newton Films says an idea is better than hope. There’s no action in hope. We can entertain you and be good. That’s the idea. ‘Cinema for the restless and hungry.’

PO: Who was the funniest person you knew growing up?

SN: My family actually. We were a comedy family. I watched SNL since I was born. Each of us ended up being ‘the funny one.’ As an actor, Gene Wilder was the funniest. You can see his performance style in so much of my work.

PO: What are the challenges of being a self-proclaimed one-woman band in the world of independent filmmaking?

SN: It works against you. But that’s how I had to do it. I was a freight train of ideas that couldn’t keep a crew on ‘no budget’. I thought, the more I can do, at the lowest budget, the more I’d be valued. Nope. Hollywood doesn’t work like that, it’s got a very different value system. It’s like seeing a Narwal, people don’t get that horn. Now I only do it for my own projects. I have made films from start to finish entirely by myself- but don’t tell anyone. From now on it’s all about ego.

PO: Where did the idea for Big Litter Ocean come from?

SN: I love mockumentaries. I love mocking myself and privilege. One sad day I rabbit-holed YouTube videos about living without plastic. Most of them are nice white ladies with bangs–awesome but serious. How could I do something different?  So I combined HBOs white lady drama Big Little Lies (a good show I was watching at the time) with a mockumentary style I do well. That very day I went to film, I was still stuck on the thru-line of my film. I passed a sign that said “Adopt a Coastline” and a light bulb went off. That was something people could relate to. I called Dina Silva who plays me in the film, and she just improvised like a genius over the phone. She was incredible in her performance and one liners. We shot it in two days. We were not sure what was going to come out of it.

PO: Tell our readers about the transition you made from Detention Officer to Filmmaker and some of the films that inspired you.

SN: Oh man that’s a big one. In a nutshell, I was all up in humanitarian work; 10 years spent in conflict zones, war zones, jails, and sad human things. I’ve a healthy obsession with trying to figure out why people do what they do. No judgies. You can’t change them, but you can help individuals. That’s what I took from those ten years. Filmmaking is brutally hard, but I’ve had worse. You want a great human experience- work in a jail.

Movies were my escape and my deepest desire. So when I hit rock bottom from all the human sadness (it happens) I had to take a break. The beautiful thing about rock bottom is you’re crazy enough to think you can do anything. Failure doesn’t matter when you’re that low. So I moved to LA with literally nothing to lose and said ‘get in there kid and have some fun with it.’

A few films that carried me are: Close Encounters of the Third Kind, Spinal Tap, The Life Aquatic, Willy Wonka (1964), and recently, Borders (2018).

PO: What have you learned about sustainability through your travels?

I saw the world through an American suburban gal’s eyes, so my ‘sustainability meter’ is biased I think. To critically think about this stuff is a luxury. Sustainability is relative to a place; whether it’s fracking, air, water, or farmable land, you gotta pick one and focus. I’ve seen a lot of crazy things in this world and I had to stand there and just witness it.

It’s the same feeling with all of us watching the rainforest burn recently. Helplessness sets in. So we bury our heads. But I promise you… if you do small things and stop telling yourself it’s too small to matter- just small things here and there- you will feel it. You will see it. ‘The meek shall inherit the earth.’ LoL. For me, right now, it’s the ocean, for them it could be smog, but pick something. AND don’t judge the fella using plastic, he might be saving orphans.

PO: What does humor add to the worldwide conversation about sustainability and environmental protection?

SN: It’s a different voice to reach a different crowd. I can’t run very fast and I hate feeling too sad, but I can make movies. I can reach those kinda people. Believe me, I toss and turn about making light of serious things, but It’s not new or super creative, even the serious Kubrick made Dr. Strange Love and that was powerful, funny stuff. People want to be good, they need to feel shame, then laugh a little. Team work.

PO: What project, that you were involved in, are you most proud of ?

SN: This one of course, but in a similar vein, I made a mockumentary on ‘feminist art’ that got me in trouble. 4 million views- it fooled a lot of people. I got violent death threats. I was stoked.

I was proud that I made something that was funny to those who ‘got it’ and to evoke violence in those who didn’t ‘get it’. I always say, once you get a death threat, you made it. It’s one of my fav pieces. If you’re curious to see it, here’s the link: The Artist Inside Us. But to be answering these kind questions and having my #begood film out there feels pretty epic. 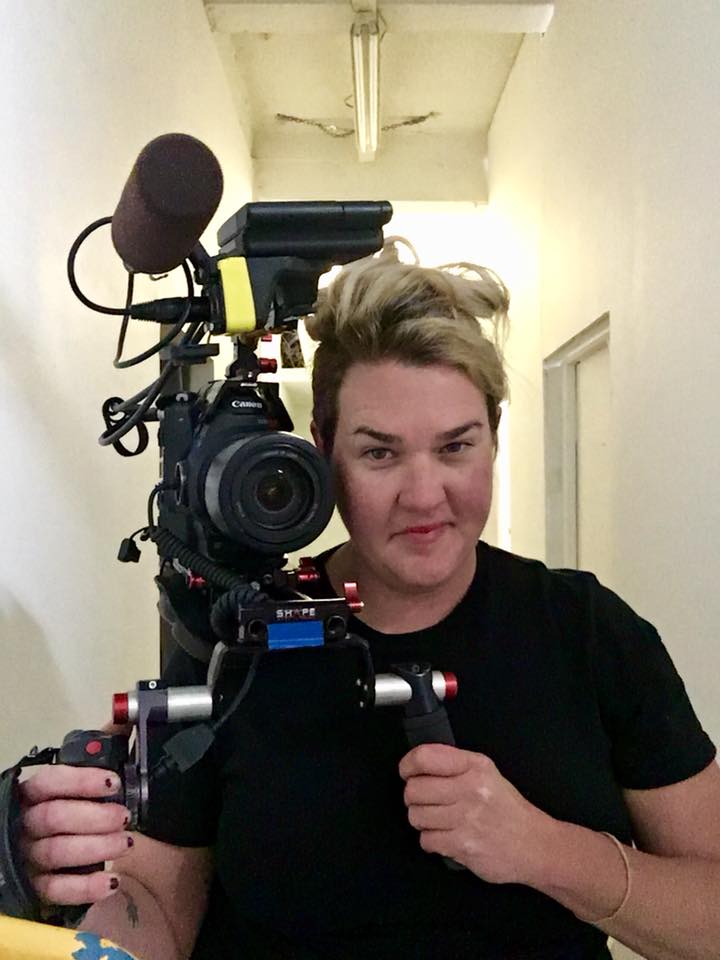 Sara Newton and her trusty camera.

PO: What’s something that few people know about Sara Newton?

SN: Jurassic Park was a huge influence on me. That felt good to say out loud. It was the perfect balance of entertainment and message. I saw it as a kid and we didn’t have google then. I had to use the dictionary to find out what ‘Jurassic’ and all the other words meant. The film says ‘just because you can, doesn’t mean you should.’ ‘Think of the future.’ It made me want to make films… I wish I could say it was Godard, but it wasn’t.

PO: Does your adopted Ocean still have a plastic intolerance and do you think it is recovering?

SN: I tell ya what, the Pacific is a real handful. I’m a damn saint. But I have heard of new advancements on clean-up that I hope to film and share with all of you. We should keep looking up and watching those who are dedicating their minds and lives to cool toys that clean seas. What is recovering is my heart. Just doing this little thing and cutting out plastic has helped me feel good. I think the ocean feels us trying. #begood

PO: What’s next for Sara Newton and Newton Films?

SN: I hope Sara Newton gets to keep making films. I have a lot of ideas, it hurts. I am currently shooting a nautical sci-fi film that is being shot on racing sailboats, so that’s real easy. In the words of Steve Zissou, ‘it’s an adventure.’ I am wide open. I want to hear your ideas too. If you have a cool script or idea to do some good in this world, message me on Facebook.