We are very pleased to announce that our creative agency, Crowd, has taken home a very prestigious award for their branding and marketing work on behalf of the Foundation.

They have been recognized for excellence in the annual American Graphic Design Awards, which are organized by Graphic Design USA, the leading publication in the US for creative designers. The win comes in the category of Branding + Identity Programs, for their work in updating the Foundation’s brand, as well as branding and marketing for our award-winning documentary A Plastic Ocean. 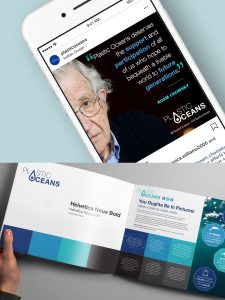 “We couldn’t be more excited and proud,” said Julie Andersen, Executive Director of the Plastic Oceans Foundation. “Crowd has been a fantastic partner. Their efforts have made a world of difference in improving how we are perceived at first glance, which helps us in many ways, including fundraising. In addition, their work with our team on A Plastic Ocean speaks for itself. The film was #1 on iTunes in three countries, launched on Netflix, has screened in over 60 countries, and has impacted over 50,000 students around the world. It has been a wonderful collaborative marriage that we look forward to continuing.”

Over 10,000 submissions were sent in, with only 10% being recognized for excellence, so Crowd is certainly in select company, especially given that they also won a second award for their own website.

“The Plastic Oceans team has been amazing to work with,” said Tod Hardin, Crowd’s Managing Partner for North America. “It’s the type of client relationship and creative work that my team at our studio in Detroit thrives in, and looks forward to every day. We are certainly honored by this recognition and thank the Foundation for the role that they played in helping us produce these award-winning end results.”

Crowd is a full-service creative agency that was founded in Bournemouth, England, five years ago. In addition to Bournemouth, it now operates offices in Detroit, San Francisco, Toronto, London, Dubai and Shenzhen.

The Foundation will continue to work with Crowd at various levels as we move into 2018. So stay tuned for upcoming projects that will help us to continue our mission to encourage the world #RethinkPlastic and make an impact in the battle against plastic pollution.