Sarah achieved the world-record swim around Easter Island on Saturday, March 16 at 3:15 a.m. EASST (UTC/GMT -5). She swam 39.46 miles (63.5 kilometers) continuously over a duration of 19 hours and 8 minutes, finishing ahead of schedule in a swim expected to take approximately 24 hours to complete. Sarah began swimming Friday, March 15 at 8:07 a.m. EASST, officially launching the Swim Against Plastic campaign. 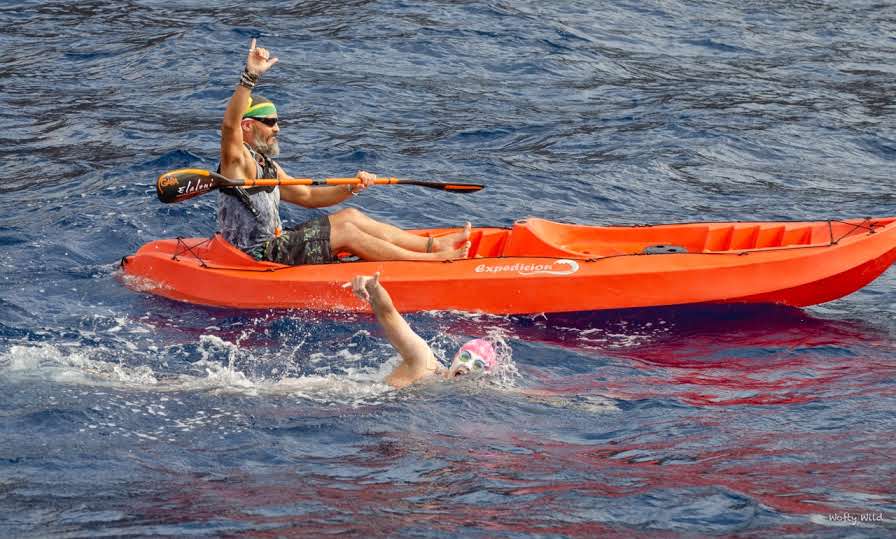 Sarah Ferguson In action, with navigator and safety officer, John McCarthy, by her side. Photo: Wofty Wild.

“It’s an incredibly special moment for my team and me right now. To have pioneered a swim like this is still something I am wrapping my head around! But to have succeeded in doing something no one else has done is both humbling and amazingly exciting,” said South African endurance swimmer Sarah Ferguson, founder of Breathe Conservation and Ambassador for Plastic Oceans International. “I hope that just as I swam around Easter Island, one stroke at a time, people choose to make one small decision at a time around single-use plastic to help preserve this beautiful blue ocean of ours.”

The goal of Swim Against Plastic is to encourage people to rethink their habits toward single-use, or throwaway plastic, and empower them to change and become part of the solution. Swim Against Plastic: Easter Island explores how local plastic pollution is impacted on a micro level—by exponentially growing tourism, increased population, commercial fishing, and waste management—while providing a model to translate to a macro level for global application. Events include the record-breaking swim, education forums and beach cleanups, all coordinated with members of the Easter Island community. 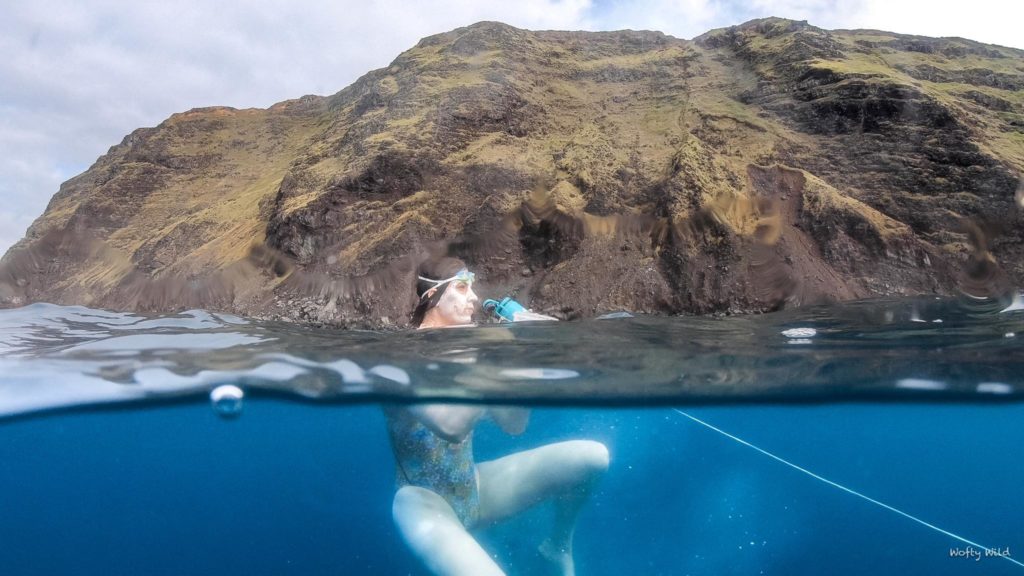 Easter Island was chosen for Swim Against Plastic, because the surrounding waters contain one of the highest concentrations of microplastics in the Pacific Ocean, despite its distant location. The Chilean territory is considered the most remote inhabited island on the planet, more than 2,000 miles from the Chilean coast, between Chile and New Zealand, with the nearest island over 1,200 miles away.

Most microplastics on Easter Island originate from sources thousands of miles away, and along with larger pieces of plastic, travel to the island as a result of the South Pacific Gyre. An additional 20 tons of trash is produced daily on the island, which has prevalent waste management issues, especially related to the exponentially growing tourism industry and increasing population.

Chile implemented new rules to limit access and tourism on Easter Island to protect the culture and environment. Rapa Nui, the island’s indigenous name, is a UNESCO World Heritage Site. It is well known for the unique cultural phenomenon of shrines and enormous stone figures, called moai, built between the 10th and 16th centuries by the society of Polynesian origin, which settled on the island circa 300 A.D. 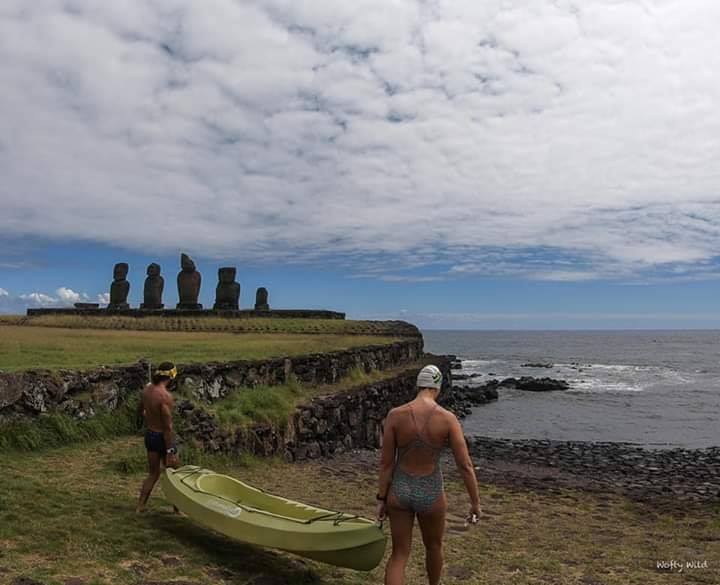 Sarah heading out for a warmup swim a couple days before setting the record. Photo: Wofty Wild.

“We couldn’t be prouder of Plastic Oceans Ambassador Sarah Ferguson for her leadership and commitment to bring attention to the planet’s plastic pollution problem with her stunning first-time, world-record swim around Easter Island’s entire perimeter,” said Julie Andersen, Global Executive Director, Plastic Oceans International. “Plastic pollution threatens the ocean, our food sources and the environment. Easter Island is an example of how even the world’s most remote, iconic and protected locations are not immune to the problem. We encourage people to rethink their habits toward single-use plastic and change their actions to become part of the solution.”

People worldwide are encouraged to join Swim Against Plastic to end plastic pollution. To get informed, inspired, rethink plastic, and make changes to be part of the solution, visit SwimAgainstPlastic.com, and follow #SwimAgainstPlastic on social media.

Swim Against Plastic is presented by Footprint, and in partnership with Crowd, Hotel Hotu Matua, and Toki Rapa Nui.

Plastic Oceans International is a nonprofit organization serving the ocean and public to end plastic pollution. Its goal is to change the world’s attitude toward plastic, affecting consumer behavior, corporate and public policy. Plastic Oceans informs, inspires and incites action on plastic pollution to shift the global reliance on plastic. It uses inspirational solutions-focused film, media and awareness initiatives, paired with supportive activism, promoting a global movement to rethink plastic. At least eight million tons of plastic are dumped into the oceans every year—the equivalent of dumping one garbage truck of plastic into the ocean per minute. While more than 300 million tons of plastic are produced annually, more than 90% of all plastic is not recycled. Learn more at plasticoceans.org, on Facebook @PlasticOceans, Instagram @plasticoceans, Twitter @PlasticOceansUS and YouTube Plastic Oceans International.

About Breathe Conservation
Breathe Conservation is a nonprofit organization that believes in a plastic-free ocean. We aspire to be pioneers by aiming high and eliminating—rather than reducing—plastic pollution in the ocean and the world around us. Founded by Sarah Ferguson, a former national swimmer for South Africa who is passionate about safeguarding the ocean for future generations, Breathe organizes swims and educates people about our oceans and plastic pollution. We’re focused on tackling culprits—like straws, coffee cups, plastic bags and sucker sticks—and promoting responsiveness in addressing throwaway, or single-use plastic. The idea is to respond in the moment, where you can, to stop plastic pollution—no matter how small the effort may seem. Breathe inspires and encourages all people to walk as if they are kissing the earth with their feet. These wise words from Thich Nhat Hanh are a powerful mantra that unpacks our message to live deeply and tread lightly. Learn more at breatheconservation.org.