Sea Turtles: A Key to Understanding Our Oceans

Serving As Indicators of Ocean Health

Among the marine animal kingdom, sea turtles are some of the most iconic and well-recognized creatures in existence, a species which has become emblematic of the global wildlife conservation movement. Collectively, its seven sub-groups are keystones which play a critical role in the planet’s oceans and further serve as indicators of their environmental health. As we seek to understand the consequences of human activity on the marine environment, the status of this long-lived, unique creature and its vulnerabilities offers key insights to the current state of our seas and therefore our world. 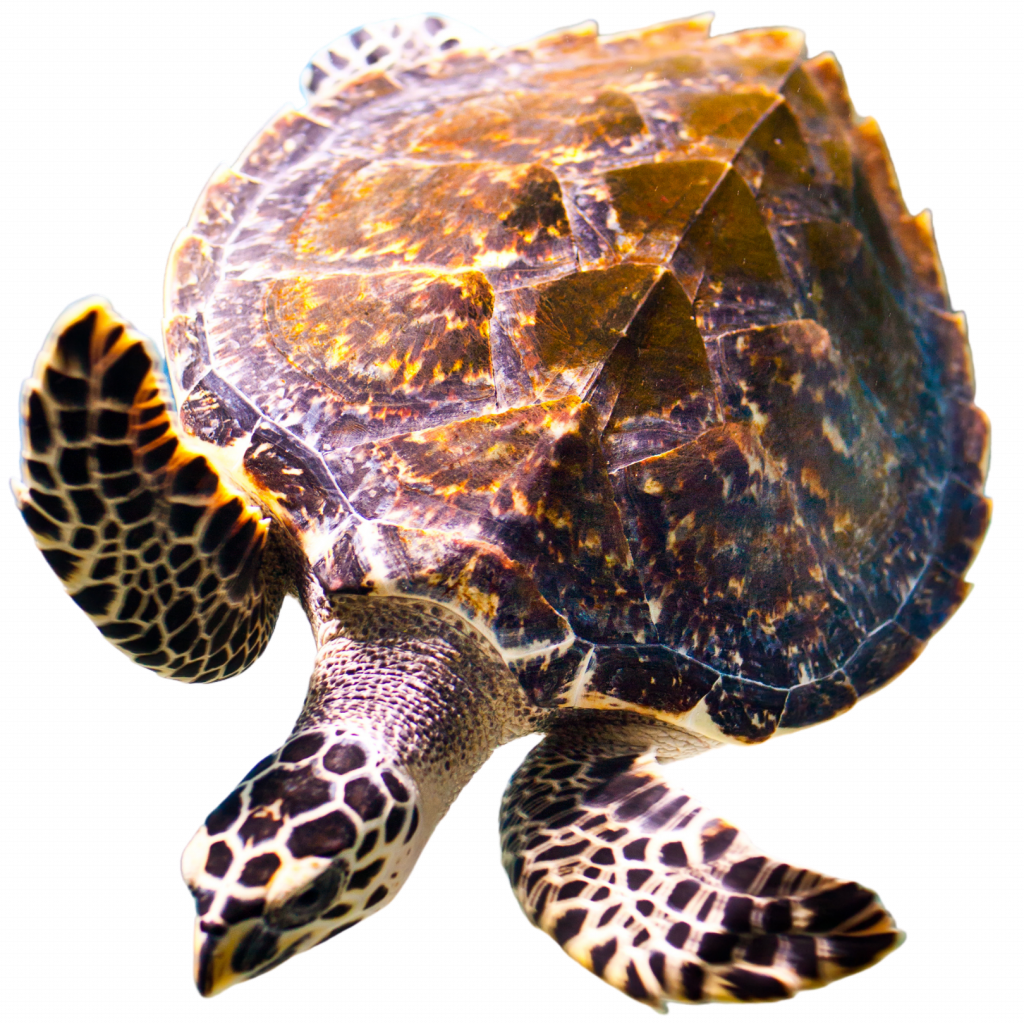 The beauty of the Hawksbill Sea Turtle.

Ultimately, only a percentage of hatchlings emerge from buried eggs. Fewer still make it to the ocean, and those that do embark on a perilous journey from the moment their tiny flippers feel the water. It is a journey full of treachery and augmented by humanity’s contemporary footprint. Even fewer turtles mature to adulthood, a process that takes decades, the most damning statistic of all being that of every thousand hatchlings, only one makes it to reproductive maturity.

CLICK HERE TO LEARN ABOUT THE CAMPECHE TURTLE PROJECT

In addition, the contribution of sea turtles to healthy ecosystems extends beyond the sea. Although most sea turtle hatchlings won’t complete the desperate dash to the water from their beach nests, their bodies (and their eggshells) provide critical nutrients for beach flora, which prevent dune erosion.

Because most sea turtles take decades to mature, the threats humans pose to their populations are augmented by their relatively slow reproductive rates. Six of the seven sea turtle species are classified as either vulnerable, endangered or critically endangered, and the ubiquity of pollution and plastic in our oceans and coastal ecosystems adds peril to their already hazardous life cycles. In addition to worsening disease burden (take, for example, fibropapillomatosis, a tumorous disease caused by stress and contaminants, among other things), pollution can wreak physical damage on sea turtles. Plastic bags, for example, resemble the jellyfish leatherbacks eat almost exclusively, and when ingested can block their digestive tracts. 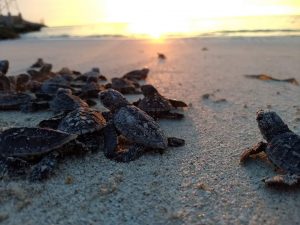 Hawksbill Sea Turtle hatchlings begin their journey to the sea.

Little doubt, therefore, that the moment a sea turtle hatchling cracks through its eggshell with a temporary tooth, called a caruncle, the odds are stacked against it. Thousands hatch along a beach at once, after weeks of incubation, and each turtle must survive a mad dash to the sea. Predators await, of course—sea birds, foxes, crabs—but modernity has introduced artificial threats that augment the peril.

Distracted by artificial lights they mistake for the moon – whose light guides them to the water – they are often confused into crawling toward cityscapes, away from the water, and risk being run over or trapped among the street infrastructure. Not to mention the plastic waste on beaches which entraps hatchlings and leaves them exposed to predators – whatever the specifics of each individual death, the fact is that beaches frequented by humans (and even those that aren’t) can be filled with obstacles.

Further afield, sea turtles are also vulnerable to poaching, oil spills and – of course – climate change. As both surface and ocean temperatures rise, in fact, the latter may be skewing the gender balance of sea turtles (the temperature of sand where eggs incubate affects the gender of the hatchling) and impacting the availability of their food sources.

On the plus side, efforts to make hatch events safer have led to beach clean-ups, more conscious use of plastic and the use of specific lighting along beaches that is invisible to hatchlings. At a structural level, governments have begun to ban or limit the use of single-use plastic items, but the roots of these decisions lie in the progressive push for plastic use reduction, increased awareness and creative, practical recycling. Although the social pressure has led some corporations to take steps to reduce plastic usage, their strategies are often consumer-directed and fail to address the abundant use of plastic in production and supply chains.

Given the current global pandemic, people are spending less time at nesting beaches because and thus making hatching conditions safer – studies already point to an upsurge in nesting numbers – but even so the global slowdown has not included a slowdown in the usage of plastic. To a degree, an immediate, all-consuming focus on sterilized items has allowed people to grow careless about their plastic. In the face of something as daunting as a pandemic, it can be hard to remember the urgency of the plastics crisis. 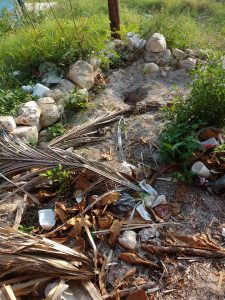 Plastic pollution and other waste near a Hawksbill Sea Turtle nest in Seybaplaya, Mexico.

But it’s important to remember how one crisis does not render another nonexistent, and even as the pandemic requires our full attention, we have to remind ourselves how modern society has not ceased the activity that deteriorates the oceans. While aspects of that activity are out of our individual control, we consume things—namely, single-use plastics—that directly impact sea turtle health. Though our choices may seem minute in the crisis’ enormity, remember how we’ve chosen to stay home, to wear masks, to play our part in minimizing the spread of Covid-19.  Just as we choose to consume harmful products, we too can choose to stop.

Without sea turtles, marine ecosystems will suffer dramatic change in oceans that have already been heavily altered by climate change and pollution. The global distribution of sea turtles underscores their vitality, but humanity’s pervasive impact endangers their collective health. The footprints of our modern behaviors may take generations to wipe away, even with immediate action, but there are steps that can be taken to make safer the watery dwellings of sea turtles – measuring and tracking turtle health and populations, protecting beaches and waterways frequented by turtles. A thorough understanding of this most emblematic of creatures will allow us to take the steps to prevent their demise, as well as helping us to understand what our oceans most need – and what they don’t.

Henry Haney is a freelance writer based in North Carolina who writes stories with a particular focus on community environmental issues.