Today’s guest blog comes from Jason Paul, who is a paddling enthusiast and lifelong lover of the sea. Jason is the lead editor of InflatableBoarder.com and lives in beautiful Panama with his wife and two small children.

Despite nationwide legislation to eliminate plastic bags from our daily existence here in the United States, our oceans are still feeling the choking effects of paper-thin plastic.  States like California, Hawaii, and Florida have all introduced new legislation either banning or applying fees to the use of plastic bags, and many individuals and organizations are doing everything they can think of to raise awareness on this issue. Unfortunately, plastic pollution is a global epidemic and national legislation and local initiatives are only a drop in the bucket in comparison to the massive global problem of plastic bag usage.  It’s estimated that nearly one trillion bags are used each year around the globe — a staggering figure by anyone’s standards.

All things considered, the plastic bag really hasn’t been a part of our culture for that long.  The first plastic sandwich bags were introduced in 1957 and were initially meant to be washed and reused over and over again.  Somewhere down the line, we moved towards single-use plastic bags for just about everything, and as a result, the Ocean Conservancy reports that their worldwide beach clean-ups collected more than 500,000 plastic bags in the last year alone.

What exactly should we do about this threat?  How can we change a habit that’s become so deeply entrenched over the last 50 years? The bottom line is, plastic bags aren’t going away unless we truly understand the seriousness of the problem. Only then will we have the resolve to search out new and innovative solutions to replace them.

So with all of that said, let’s get to my top 5 reasons for ditching the plastic bag… 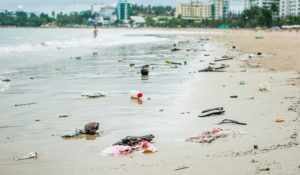 Unsightliness.
Nobody likes seeing a floating bag, translucent or otherwise. The United Kingdom recently dubbed discarded plastic bags as “an iconic symbol of waste.”  It’s no surprise why, considering the country reported the use of 8.5 billion single-use plastic bags in 2017 alone.  But don’t turn your nose up at England too quickly — their 8.5 billion is dwarfed by the United States’ 30 billion bags used each year, and without a doubt, more than a few of these single-use monstrosities make their way to the ocean. The obvious and incredibly simple solution is to use a reusable bag, and it’s estimated that one reusable bag can replace a thousand plastic bags during its lifetime.

Biodegradable?  Think again.
Since decomposition of a plastic bag can take upwards of 400 years, they’re not going anywhere fast.  Four generations later, that bag you used to carry a single jar of peanut butter will still be hanging out.  Furthermore, plastic products never experience true decomposition. Rather, plastic breaks down into smaller and smaller pieces known as microplastics.  While a number of microplastics exist on their own (such as glitter), plastic bags are considered one of the main contributors to the growing microplastic epidemic.  So stuff your groceries into your backpack or purse and encourage your friends to do the same — your individual efforts can make a real difference.

Bioaccumulation.
Plastics have been found to move their way through aquatic food webs around the world.  Remember those microplastics we mentioned a moment ago? Studies have shown that the majority of plastic pollution in the ocean is made of these microscopic bits of trash.  In fact, in 2017 alone, more than 1,000,000,000,000 pieces of microplastics were collected in beach clean-ups worldwide. The Ocean Cleanup project discovered recently that in the great pacific garbage patch, microplastics outnumber their micro-invertebrate counterparts by 40:1.  This means that larger animals living in the area are likely to ingest these plastics after mistaking them for plankton, thus infecting the food chain.  A plastic bag will eventually “biodegrade” to hundreds if not thousands of microplastics, so we all need to carefully consider what can be done to reduce the accumulation of microplastics in ocean environments. 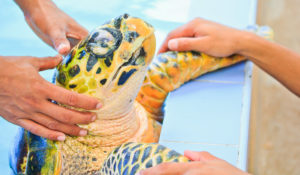 Pushing animals from endangered to extinct.
Sea turtles have enough problems as it is. After traveling the world, they all too often lay their eggs on beaches only to be trodden on or collected by humans.  Once hatched, they must traverse a predator-infested beach to the ocean and begin the cycle all over again. Most sea turtles spend the majority of their lives foraging on algae, jellyfish, and unfortunately — bits of plastic.  Plastic bags, resembling traveling jellyfish seem to be the main culprit when it comes to the sea turtle’s demise. Based on a study of 370 leatherback sea turtle autopsies, 1 out of every 3 had stomachs infested with plastic bags.  These bags can block the digestive tract causing gas production, and in turn, the gas causes increased buoyancy which makes it impossible to dive for food.  And that’s just one species of sea turtle. Leatherbacks are generally considered to be doing well in comparison to their endangered cousins — green sea turtles and hawksbill sea turtles.  Sea turtles are often synonymous with the beauty and wonder of the ocean, so ditch that bag and consider an alternative.

Gender-bending chemicals.
It also seems that the rise of plastics in our oceans is causing unforeseen effects, including gender manipulating capabilities.  Plastic tends to hold high levels of dioxin, a chemical known to affect the endocrine system in both humans and animals. The endocrine system controls hormone production and as plastic pollution continues to rise, so does dioxin levels in the water.  This has resulted in the discovery of fish with intersex anatomy, such as male fish carrying aspects of the female anatomy. These sex-affecting pollutants don’t just stop at fish, however. They’ve been known to cause harm further up the food chain reaching seals, polar bears, and potentially humans.

Plastic bags continue to wreak havoc across the globe, despite increasing efforts to eliminate them.  In this day and age, we have a unique opportunity to raise global awareness about the effects of plastic bags and make new, better choices.  Changing our habits one bag at a time could mean the survival of a species, the preservation of natural beauty, or 400 years with one less piece of plastic.

It’s time to do our part.