Finally a Special Day for These Elegant Birds

The Agreement on the Conservation of Albatrosses and Petrels, ACAP, will hold for the first time in history a World Albatross day on June 19th 2020.

Going back in time, when I first learned of the albatross as a kid, I remember that I was very impressed! 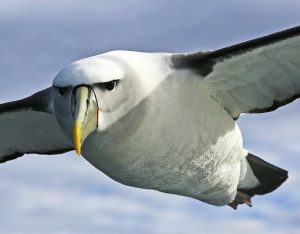 By its wings, its elegant flight over the oceans and its curious courtship rituals. I always had this conflict between cheering for the albatross or the condor, both birds with impressive wingspans.Although now I live in a country where the majestic condor rules the high Andes mountains, it’s the Albatross that rules the seas of the Southern Hemisphere with its amazing 3.5 meter wingspan! I guess size does matter.

And the list of amazing facts about these birds continues: the distances they fly, the time they can spend flying over the open ocean without setting foot on land, their age, the fact that they are mates for life, and so much more!

When I just started with Plastic Oceans in 2017 I had the chance to share a panel with Chris Jordan, the filmmaker. He was promoting his film “Midway” and showed his latest trailer at the event. This film later was baptized to “Albatross”. He had seen his own film many times, but he was visibly moved seeing it on the big screen. So much even that he needed some time to find the right words between his emotions, before continuing. I can’t imagine what it feels like to have spent so much time surrounded by albatrosses. Alone, on that remote island in the middle of the Pacific Ocean with hundreds of thousand of albatrosses. Over the span of four years he visited the island eight times. He got to know them one by one. He saw them hatch and grow up, but also had to bury quite a few of them. Because of plastic pollution.

“The experience was devastating, not only for what it meant for the suffering of the birds, but also for what it reflected back to us about the destructive power of our culture of mass consumption, and humanity’s damaged relationship with the living world.” – Chris Jordan 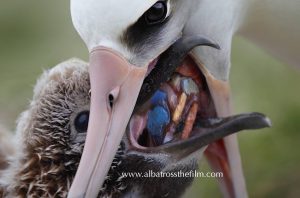 Albatrosses unwillingly feed their chicks loads of plastic they get from the ocean, stuffing their tiny stomachs with bottle caps, cigarette lighters and microplastics. These chicks then die of malnutrition, because they don’t get any real food. It’s a painful example of how nature suffers because of our unconscious and selfish behavior as humans.

So, we have a choice, should we have another day for an animal that suffers because of our actions? Honestly thinking of World Albatross day I think it should be a day of celebrating the albatross. Not another one of those days where we focus only on threats. I know that this year’s theme is “ Eradicating Island Pests”, and it’s good to talk about it, but I wonder if it could be different. If everyone would feel a connection with nature, with animals, feel love and admiration for them, would we want to hurt them? Would we be willing to change our behavior out of admiration instead of guilt?

I ask myself this question today and I leave you with it………what motivates you to change?