Being a Good Ally: The Educational Work of Sam Pickering

Samantha Pickering is Director of Education for Plastic Oceans International. In this exclusive interview she talks about her work, what motivates her and why there is hope for the future of our oceans – and our planet.

Where did environmental work begin for you? 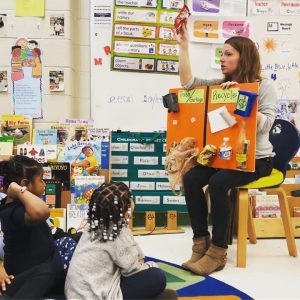 I started a cleanup club at my school when I was eight years old. We picked up litter around the campus and planted flowers in the spring. Even now I’m conscious that mitigating isn’t enough, that we need to generate beauty.

So I guess that environmental work has always been on my radar, even from a very young age. I’ve had concerns for the environment since as far back as I can remember, and I’ve always wanted to do what I could to help make things better.

Later, for several years, I taught recycling education in Detroit, and I began to realize what a complicated material plastic is. People always had questions about it, and I didn’t always have an answer. So I began doing more research and started to learn more and more about the history and current crisis of the material. Then, when China stopped taking our plastic waste a few years back, recycling streams in the US really began to struggle because no one wanted it – it’s cheaper for a company to use virgin materials to create products than post-consumer (recyclable) material. Around this time is when we began emphasizing the “R” word – REFUSE –  in much of our recycling education, specifically refusing plastic.

I wanted to help people realize how prevalent plastic is in their daily life and how to make it less so.

What does educational work with Plastic Oceans International consist of?

Fundamentally, the educational program work with POI consists of developing the educational materials and relevant activities for youth and adults. We all need this information!

On a day-to-day basis, it looks like organized chaos! Imagine an artist that uses several different types of mediums to create their piece of art. My process for developing an educational program is very similar. Sometimes it requires some research on the topic, sometimes it just comes out of me. It’s like taking pieces of a puzzle and shaping them all together in a way that would (hopefully) make sense to others.

Then it often also involves live engagement with a group. When that happens I usually start with the conversation I want to have with the individuals and the main takeaway message. Personally, I don’t like getting in front of a group of people and talking AT them. I prefer a lot of call and response. This keeps people engaged and present in the learning process – and people generally make change happen when they take on that change for themselves, not when they are told to by others.

When all is said and done, I want to be the best ally I can be to everyone around me.

So would you say that education and environment necessarily go hand in hand?

You simply can’t change your behavior if facts aren’t known and realized.

Educational offerings need to be informational but they also need to be solutions based. You have to provide realistic offerings that show people the things they can do to avoid plastic in their lives (where feasible) and acknowledge that natural resource conservation requires behavioral change.

The more we can connect the dots with people on how humans impact the environment, the more likely we are to take actions that support its well-being – which also happens to be our well-being.

A lot of environmental messaging these days is largely negative, and keeping positive and mentally healthy is an important component of activism. How do you go about this for yourself?

Nature has taught me of the need to go with the flow. Everything in nature is cyclical, and the human population should do its best to emulate that in everything we do – it genuinely really helps.

Researching indigenous culture and emphasizing their values of caring for the Earth as one would care for oneself also helps me, because I realized that if I don’t care for myself, I can’t care for the space around me. 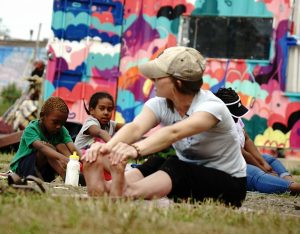 Sam compares environmental work to doing yoga – a constant effort for change even if you may not achieve perfection.

I also did my yoga teacher training and began deepening my practice of non-judgement, among other things. I realized there that there is no end goal to doing yoga. It’s meant to be a practice. Something you may excel in one day, and wind up being less enthusiastic about it the next day, but you do it anyway. Sustainable practices are directly proportional to this because we are practicing behavior changes and new habits. It’s not something we’ll ever be 100% great at. It’s time to let go of the idea of “perfection” and practice where and when we can to the best of our ability on that given day. For example, don’t judge yourself or feel guilty about buying a bottle of water from the store because you forgot to pack your reusable bottle. Things happen, and that’s okay. You’ll do better the following day.

The importance of incorporating social emotional learning within environmental education. Sometimes reality is depressing, and it’s important to call that out and work through those feelings by helping others realize it can get better if we take collective action as a population.

Is the work with Plastic Oceans what you thought it would be before you got involved?

I had NO idea what I was getting into initially, but it’s turned out better than I could have imagined!

Dive in, get involved, roll with the punches and make a difference! We all have a role to play in advancing our relationship with the environment.