Creativity In Action – The Filmmakers of ‘Birthplace’

Meet the Creative Visionaries Behind the New Novo Amor Video

We are excited to continue our initiative to bring the value of creativity to the forefront, showcasing it as a powerful tool in our efforts to raise awareness on the issue of plastic pollution, to inspire action and to create meaningful change.

Earlier this week we had the pleasure of publishing an engaging interview with Welshman and musical savant, Ali Lacey, best known as Novo Amor. The release of the video for his song Birthplace has garnered a great deal of attention among music fans and those who have a passion for protecting our oceans from plastic pollution.

Today we turn our attention to filmmakers Sil van der Woerd and Jorik Dozy, the visionary creatives behind the Birthplace.

The video is visually stunning and extremely powerful, which is no surprise given their previous work with Novo Amor for his video Terraform. That short film is one that can bring tears to your eyes, as it addresses the horrific working conditions that the sulphur miners of Kawah Ijen, Indonesia, must endure.

Birthplace continues the narrative for social change, making obvious the scourge of plastic waste in our seas, via elements from the story of Jonah. It features world-class freediver Michael Board, who co-stars with a gigantic Humpback Whale made of trash, whose construction became a bit of a community project for the locals of a small village in Bali.

It was quite an undertaking and we are honored to not only present “The Story Of Birthplace”  –  a short film about the production of Birthplace, but also an in-depth Q&A that Sil and Jorik have been kind of enough to do with us.

CLICK HERE TO VIEW “THE STORY OF BIRTHPLACE” – a wonderful “making of” documentary.

Enjoy the interview below.

Tell us a bit about yourselves. How did you come to be filmmakers?
Film is the medium where many art forms come together. Story, visual, sound. When we met in Hollywood a decade ago, we discovered that we shared a mutual passion for film and that we had many overlapping interests. Our films started as experiments but became our expression and our voice. The place where we can really say what we want and share with the viewer what stirs inside of us.

Birthplace is such an amazingly creative concept. Simple question … how the hell did you come up with the idea?!?
We want to make films about stories that matter, especially when those in disadvantage can’t speak for themselves. After seeing many clips of ocean creatures struggling with plastic that we humans produce, we realized that the pollution of our oceans is one of the most important stories of our time, and that we HAD to somehow share this story. When we heard Ali’s music the specific idea for this video came to us almost in a flash. We don’t know how the human brain works, but suddenly the idea was there.

What was it about Novo Amor’s song that clicked with you, as far as connecting it to the story of plastic pollution?
For us, the title ‘Birthplace’ said it all. Nature, including the oceans, are the heaven on earth that we’ve been given, where we come from. It is our birthplace. How will we treat it? 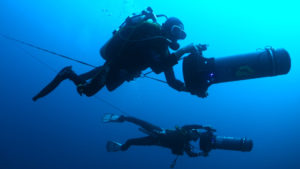 The entire video is shot underwater. What difficulties did that pose for you?
We built a life-size humpback whale, 13 meters in length, made of trash, and took it underwater where it had to swim and swallow our main character. Because it was such a large volume, we needed many divers to help us control its motions and to keep it buoyant.

For Michael Board, the freediver who portrayed the man in the video, there were many challenges. Normally he wears a streamlined wetsuit, fins, a mask, a nose clip and a snorkel. But in our shoot he had none of that. He had no fins, wore real clothes that soaked up water and that didn’t provide any warmth. Michael couldn’t wear a mask so he was practically blind underwater. Salt water was constantly stinging his eyes. In the footage we see the turtle or manta ray in great detail. Michael just saw a blurry shape, and often didn’t know weather it was coming towards him or getting away from him.

The currents proved another challenge to the entire underwater team. In Komodo the currents would pick up rapidly and suddenly change direction. On some occasions we decided to just let the current take us and then have the boat collect us wherever we ended up. On top of all that was the challenge of communication. Filming underwater is very different from a normal film set, where you can say to the actor or cinematographer, ‘look up’ or ‘go slower’. What we ended up doing was Jorik being underwater with cinematographer Nihal communicating through signals and a waterproof writing board, and Sil snorkeling at the surface talking to Michael each time he came to the surface.

And then there was the wildlife… which you can’t plan. We spent several dives simply waiting for something to show up. Sometimes we got lucky, sometimes we just got cold.

The video is stunningly shot. Who was the cinematographer and what can you tell us about him or her?
The video is shot by Nihal Friedel, Cinematographer and Lead Visual Effects at a big studio. Nihal is also a very experienced diver and brought lots of specific knowledge on equipment and locations. He truly rocked his way through the shoot. 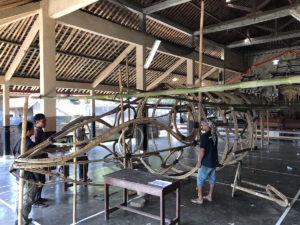 Villagers in Bali creating the Whale.

The whale is as amazing to watch as Michael is. Truly powerful, but it must have been quite an undertaking to create it and use it in the video. Can you provide any insight into what that experience was like?
We designed the whale after a real size humpback whale, and broke the design into segments so that we could make it move underwater, take it apart, move it into trucks, and assemble it in the ocean. The whale had to have a steel cable from the tip of the nose, so that divers could pull it with underwater scooters. Inside had to be two more divers who each controlled the flapping motion of one fin. The whale also needed a mechanism to open its mouth.

We brought the design to Dalbo Suarimbawa, an art director in Bali, who moved a small army in a small village to build the whale – there are 25 villagers credited. The whale consisted of non-sinking materials; bamboo and plastic. The bamboo was freshly cut from the forest, and then split and modeled into many thin layers to form a strong structure. The bamboo segments were wrapped with real waste, and covered with fishing nets to which we attached lots of plastic bags and waste which we sourced from the area. Much of it was collected by school children who would clean the area in exchange for books and pencils.

How did Michael Board become involved in the video?
Jorik and Nihal did a test shoot in Singapore at Zen Freediving – a freediving school that has close connections to Michael Board. We met with Michael on Skype, he was literally the first freediver that we ever talked to, and after the call, which was constantly disrupted by a tropical storm, we both instantly fell ‘this is the guy!’
Michael has been incredibly professional, kind, patient and such a team player during the shoot. It was a true honour and a total blessing to work with him.

Where was the film shot?
We filmed in 2 locations. The first was Amed, a popular dive village in Bali, which we chose because our production team found a group of bamboo builders able to build the whale, and because Amed features relatively calm waters where we could film the whale in the ocean. The second location was Komodo, also in Indonesia, where we filmed the wildlife. Komodo was relatively close to our first shooting location and offers some of the best reefs in the world thus providing the perfect setting for the pristine ocean we wanted to show in the opening of the video.

Still image of a miner from Terraform video.

Social issues appear to be a theme for you, based on also having seen the very powerful video you made for another Novo Amor song (with Ed Tullett), Terraform. Why tackle such issues?
There are many reasons. Sometimes we all feel like beholders of a ship going down, unable to do anything about it. The news presents us with suffering each day. Film is our voice in some way, an outlet to express what we feel, to express things we encounter and care about. What we learned through these projects, is that they are also incredibly humbling and bring great connection. We get to meet the most interesting people and encounter some of the most interesting situations all over the world and open them up to an audience worldwide.

What is your take on the role that creativity can play in addressing – and possibly helping to solve – the social and political issues of our time?
There are many different types of people in this world and you can’t approach all of them in the same way. As with many global environmental problems, the most important step is to raise awareness. Most often, the information about these problems reaches us through news outlets, and it can have a numbing effect. Sharing these stories through art can reach the viewer on an emotional level. Sometimes it works better to bring information gently and heartfelt, than bluntly and horrifying. We don’t want to get people depressed, we want them to get inspired to make a change.

In the end, what is your hope for the video, as far as it’s impact on those that see it?
We hope that the viewer first falls in love with the beauty of the ocean, that they see that it is perfect. And then we hope to break their heart when we introduce the waste. We used recognizable products like a plastic bottle or a can that we all relate to, in hope that the viewer connects itself to the problem.
Because we can feel helpless in the face of such a massive global problem, we also wanted to provide more context, and offer suggestions to the viewer on how they truly can make a change as an individual. It’s all our small efforts combined that can lead to the big change. www.novoamor.co.uk/birthplace