The Cenotes of Mexico Have Become A Dumping Ground

The cenotes of Mexico’s Yucatan Peninsula are iconic natural formations, but as is the case far too often, even with our natural wonders, they are not immune to human impact. 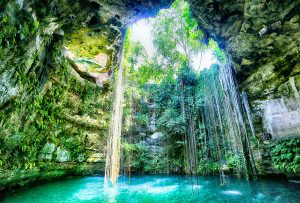 Cenote Ik Kil shows how stunning these formations can be.

Cenotes are a vast and interconnected system, formed by the collapse of porous limestone bedrock which exposes groundwater pools. Beyond their geographical components, they are sites of great historical and cultural importance to the Mayan people. These days, they are perhaps more widely known internationally as breathtaking swim spots for locals and tourists.

Until recently, it was thought that each of the cenotes existed as an entity in itself, however in 2018 it was discovered that the longest subterranean cave system in the world existed beneath the ground, forming a vast coastal aquifer system which links the landscape to the ocean. This was less a triumphant new discovery, and more a bridging of spaces which the ancient Mayans knew to be sacred sites.

These carbonate systems are home to a diverse range of flora and fauna endemic to the cenotes, such as sightless cave fish and blind crayfish. Each cenote has a slightly different composition, even when they are in close proximity to one another. 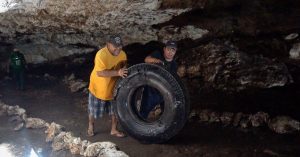 A tire cleared from a cenote in 2018. Photo: Especial

Now, however, the health and unique biodiversity of the cenotes is under threat from a profusion of waste. To date, 10,000 kilograms (over 22,000 pounds) of solid waste has been extracted from 35 cenotes by the Yucatan State Ministry of Sustainable Development (SDS) in conjunction with municipal workers and local residents. Among the waste dragged from the depths were bicycles, tires, the widest array of plastic imaginable (and what a range of disposable plastics humanity has come to invent), and a remarkable 117 power meters, suggesting that far from the cenotes being ad hoc places to dispose of occasional waste, they have instead been used as unofficial industrial dumping grounds.

Ancient Mayan cultures, who built some of their largest civilizations around the cenotes, continue to live in small and disparate communities in their environs. Today, these communities, whether directly or indirectly, still derive their water resources from the cenotes. Pedro Uc Be, a Mayan leader who is part of the Múuch Xíinbal Assembly of Defenders of the Maya Territory, considers cenotes to be of “fundamental importance” to native peoples of the area.

“They weren’t just crucial to our survival, in terms of drinking water, but also a source of food, housing abundant fish and animal populations which formed part of our staple diet,” said Uc Be. “Perhaps their most important significance has been cultural as we have traditionally regarded water from their most inaccessible points as being pure and formed part of many of our sacred ceremonies, as well as being a meeting point for our communities during the dry seasons.” 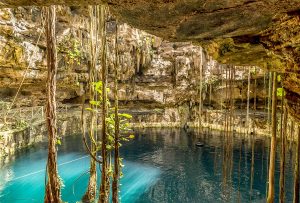 However, whereas the Mayans had a complex system of water management, which was adaptively engineered to the local ecology and the mutating needs of the local population, modern communities and piped water have given up many of the traditions and rites which contributed to the safeguarding of the cenotes. “Now there is extensive use of disposable plastics in the cenotes without there being an accompanying cultural education regarding waste,” continues Uc Be, “and these sacred spaces have become more and more polluted, with new generations losing this fundamental link to these most unique of spaces. This loss of identity has led to many of these cenotes being regarded as nothing more than holes with water, regular dumping grounds for plastic, tires, and anything else which needs to be removed from plain sight.”

Today, in other words, the Mayan communities of the Yucatan Peninsula (and these communities are by no means unique to this) are increasingly divorced from their surroundings, environment and means of production, losing sight of the notion that – as with the underground fluvial systems they reside on top of – everything, everywhere is part of a system, and that what happens somewhere affects something somewhere else. 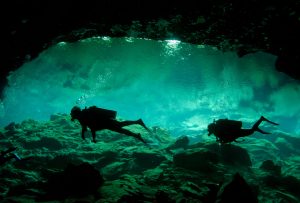 Mexico’s cenotes are a favorite among scuba divers.

Of course this means that when waste is dumped in a remote cenote in southern Mexico, it doesn’t just stay in situ but contaminates more widely – that no waste we generate in fact can simply be “disposed of” but has a time and spatial impact well beyond what we can see and measure and feel. But it can also be taken positively in that it must also mean that when one person makes a positive change in their life; refuses a plastic bag; advocates for zero waste alternatives; or mentally and emotionally starts to connect to the innate system of our relationship with our planet – that all of these choices must necessarily have a broader impact.

In truth, all movement; all endeavor has impact. Sometimes we can get lost in our perceived limited agency amid the great big vortex of global problems, but fundamentally we remain our own agents with the capacity to affect and activate those around us, and they in turn with others around them.

As the amazing underground caves and rivers of the Yucatan Peninsula teach us, there is nothing on Earth which exists in isolation. All that is left is to choose who we want to be, and how we come to generate those spaces for ourselves and those around us.