Oceana, Plastic Oceans Chile and a group of senators from different parties support:

Valparaíso, May 14, 2019. On average, at least eight million tons of plastic enter the ocean each year, and 75% of the waste found during beach cleanups are products made of this material.

The environmental impact is severe, and Chile is not oblivious to this.  According to the plastic industry’s estimations, Chile annually consumes about one million tons of this material. In view of these alarming numbers, Senators Guido Girardi (PPD), Carolina Goic (DC), Felipe Kast (Evopoli), Juan Ignacio Latorre (RD) and Rabindranath Quinteros (PS) presented a bill of law that was prepared in joint work with organizations Oceana and Plastic Oceans Chile. This initiative is also endorsed by deputies Catalina Pérez (RD), Luis Rocafull (PS) and Sebastián Torrealba (RN). 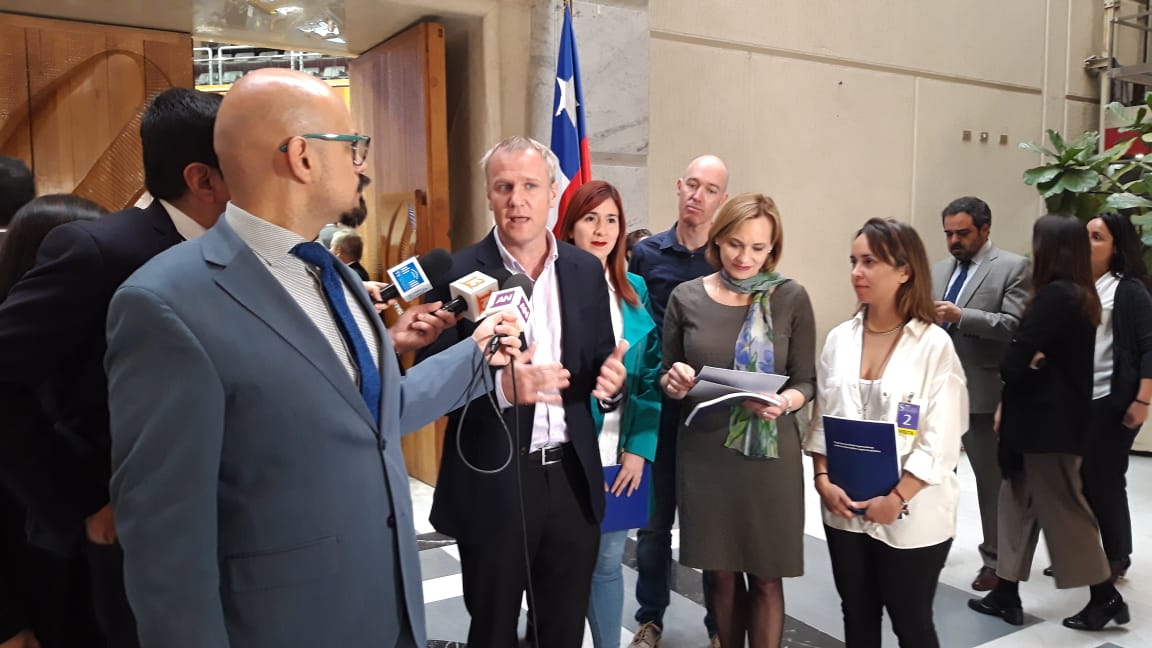 Javiera Calisto from Oceana speaking to the press, joined by Senators Kast, Goic and Girardi

“The proposal we present aims to limit the production of disposable products and regulate plastics, specially small-sized products that we discard after being used for a few minutes”, explained Javiera Calisto, Oceana’s Marine Pollution Campaign Director. “We have done exhaustive work, developing a base line regarding the situation of plastics in Chile, analyzing legislation from different countries that have regulated single-use plastics. This information was crucial for the bill that is being introduced today and was worked on with different sectors and organizations,” she stated.

Camila Ahrendt, Science Director at Plastic Oceans Chile stated that disposable plastics arrive into the ocean in large amounts, “which are fragmented into small pieces that involve related pollutants, directly affecting marine fauna that eat these small pieces and consequently, human beings that eat marine fauna as well”, she said. “Considering that the annual production of 348 million tons of plastic will triple by the year 2050, this bill is an invitation to rethink our habits, reduce our footprint and innovate on the current consumption models, to allow for sustainable development and harmony with our surroundings,” she added.

How would the law work?

“The project that was presented aims to limit the use of single-use plastics that quickly become trash and whose utility is not economically justified”, stated senator Guido Girardi, Chairman of the Environment Commission of the Senate. “It just can’t be that because of ignorance or unawareness we are harming the planet, the oceans and ourselves. We think it’s absurd when there are options for other forms of packaging. All the industries that use non-degradable plastics will have to replace them for others that are more in harmony with life and the environment,” explained Girardi.

Evopoli senator Felipe Kast, who also belongs to the group of senators that presented the bill said, “this addresses a prevailing and urgent matter and also presents itself as an opportunity for our entrepreneurs and our market to increasingly focus on sustainability and the transit toward a circular economy.” Kast added that, “the planet is hurting due to plastic; the damage -which unfortunately has already been done- is so incalculable that responsible research and the intelligent formulation of laws and public policies is an effort that our country must urgently join.”

It should be noted that another negative consequence of plastic is the exploit and production of oil, its primary raw material, which has helped to increase the levels of greenhouse gases, directly contributing to climate change.

The proposed regulation is aimed at food-providing venues such as restaurants, cafeterias, small food stands and other stores that serve prepared food or beverages and will have to offer reusable products made of ceramic materials, wood, glass or similar. Take-away food venues will have to provide disposable materials different from plastic such as, for example, alum 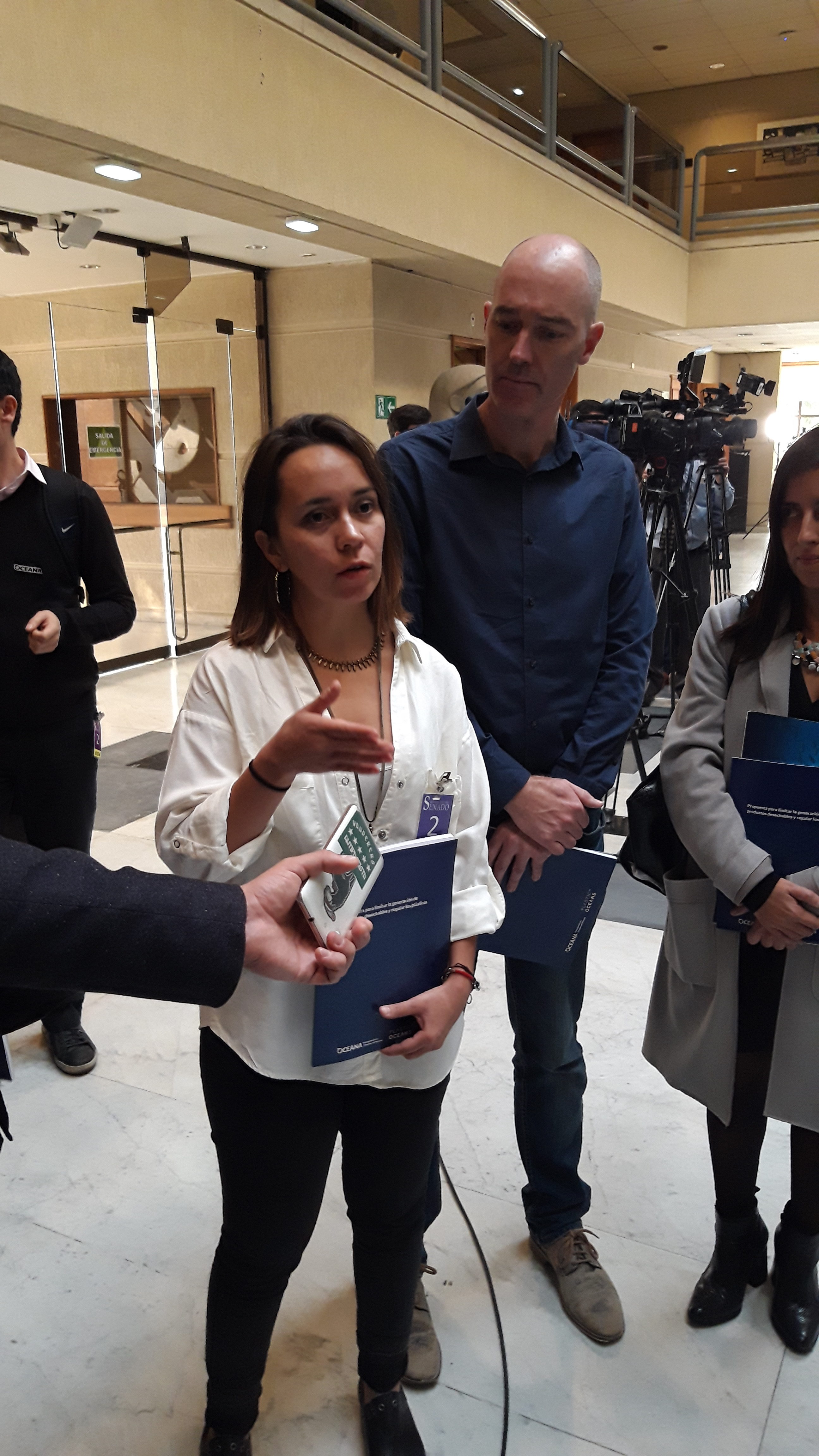 Science Director Camila Ahrendt explaining to the press how the environment is being affected by plastics.

Regulated products include glasses, cups, mugs, cutlery, stirrers, straws, plates, containers or food trays and their accessory packaging, lids, bottles equal to or less than 500 cc, which will be gradually banned.

The law’s entry into effect

The bill distinguishes the entry into effect between large establishments and micro, small and medium businesses. Regarding the first, the bill sets a time frame of six months to begin to ban expanded polystyrene products, popularly known as styrofoam (plumavit in Chile), while providing consumers with products made of reusable materials will be mandatory by the first year; the provision of disposable materials will be banned when consumption occurs within the establishments. By the second year, vendors will have to provide disposable materials different from plastic or certified plastic for consumption outside the establishments.

The time frames for micro, small and medium businesses are a bit longer. Styrofoam will be banned within a year; the obligation to provide reusable products will be enforced by the second year, and the ban on providing disposable products made of materials different from plastic or non-certified plastics will enter into force in three years.

According to the United Nations, by 2050 there will be more plastic in the oceans than fish; studies estimate that by that same year, 99% of sea birds will have ingested plastic residue.