Pedro Uc Be is a writer, poet, a narrator, translator and activist, at the forefront of Mayan resistance to colonialism and extractivism. As part of our efforts, at Plastic Oceans International, to tell the stories of underrepresented socio environmental voices, we are proud to present this interview with Uc Be, conducted by Managing Editor, Jon Bonfiglio.

As a Mayan activist, how do you frame the environmental crisis?

The environmental crisis for us as Mayans is more of a local affair, by which I mean that there are specific acts here in the Yucatan that are undertaken against nature. We’re talking here about deforestation, about the mass death of bees caused by insecticides, the destruction of our sacred cenotes, of water contamination and so on. This is what we understand as an environmental crisis, but it’s also more broad, because you can add to that the absence of rains, prolonged droughts, degraded soils, and of course the ongoing distancing of our community from their cultural roots, because as people lose their identity – which also means their traditional growing spaces, and their means of generating food for their families – they migrate to the big cities to look for work. 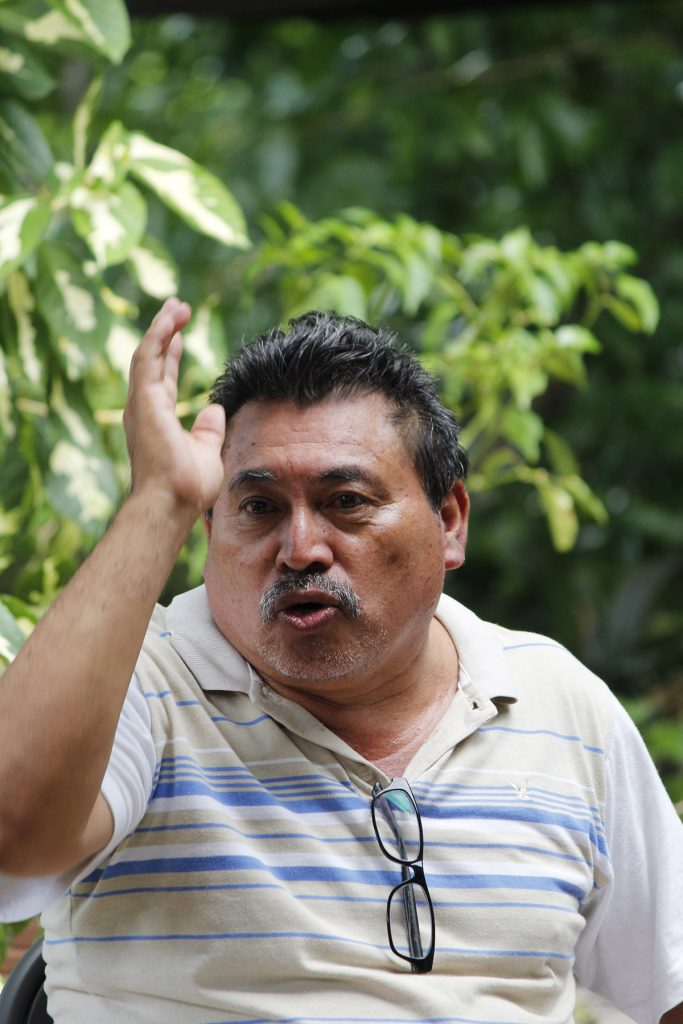 Pedro Uc Be, a beacon for his community.

What is your perspective on the link between social justice and environmental justice?

To Mayans, social justice and environmental justice are one and the same thing. We regard all life as one entity. The social crisis and the environmental crisis appeared together in our world, at the same time, and had the same underlying causes. They are indivisible, and are related to health, to education, to sense of self, to belonging, and so on. It is an affliction generated by a certain kind of aggressive modernity which is intent on economizing and extracting all entities. A modernity which you might call ‘colonialism’, in all its forms.

In the ‘environmental debate’ we tend to hear the same voices. Could you speak a little about the importance of all voices being represented in this discourse? Especially those voices which tend to be underrepresented in the public forum.

The ‘environmental debate’ is elitist, simply put. The discourse and the forums are organized by those who run the world as a result of their wealth, and they in turn have that wealth because of how they have made use of the world. As Mayans we don’t have that participation.

But equally we’re not really interested in that debate. We regard those forums as illegitimate. They are not a space for discussion, but a dictat on how to behave. We are told by them about waste, and that we should collect waste, but the truth is that the biggest companies generate waste and put our communities and the world at risk and nobody says anything to them.

A real environmental discourse must be a debate at our level, a pluricultural debate which gives a voice to first nations. It cannot happen in Paris, London or New York, but must take place at a human scale in traditional communities across the world.

How do you work or find avenues for your personal and collective voices to be heard?

It’s a tricky subject because the real question is who do we want to hear us? Those above have no interest in hearing us, those doors are closed. The real challenge is for us to be heard among ourselves. How can we generate communal spaces to listen and be heard, and make collective decisions based on those voices.

Of course more broadly there is a legal framework which we must access in order to put a brake on outside incursions into our society and environment – and we work in those forums too, but the odds are stacked against us there too.

Our best strategy, the basis of everything, is to be organized as a community.

To gather our collective voice.

The world is currently living a devastating environmental crisis, but the Maya have been suffering an existential crisis for hundreds of years. Is there a link for you between the historical and ongoing crisis that the Maya (and indigenous people have been suffering) and the current global predicament?

Our crisis has been going on for over 500 years – and really we’ve been able to survive it because of a self-constructed resilience.

That’s our secret, if we have one. But each day we are more affected – there are fewer Mayan speakers, fewer people who identify as Maya. But recently there has been a curious development, in that a new Mayan recorded consciousness has started to emerge through literature, science, history, music. This creation of memory generates hope for us. We have started to develop a recorded cultural awareness of ourselves.

Pedro Uc Be was speaking to Jon Bonfiglio, who has covered Uc Be’s activism and defiance for a number of years. Uc Be has most recently received public recognition for his opposition to imposed megaprojects, particularly the Tren Maya, but also unregulated pig farms that threaten water quality on the peninsula, as well as vast wind farm developments that choose indigenous land for development as they believe it to be a terra nullius (no man’s land).

Uc Be regularly receives threats of violence against his person, including death threats.

Jon Bonfiglio is a broadcast and print journalist, as well as Managing Editor for Plastic Oceans International’s written content, including the quarterly interactive digital magazine, Currents.