For those lucky enough who have visited – and the millions more who have yet to – that single word conjures up immense notions of beauty and the sublime just as much as Galapagos, or Amazon.

A vast territory at the southern end of the Americas incorporating the bottom section of the Andes and situated within Chile and Argentina – comprising vast peaks and valleys, enormous glaciers, stunning fjords and the most southerly forests on earth. 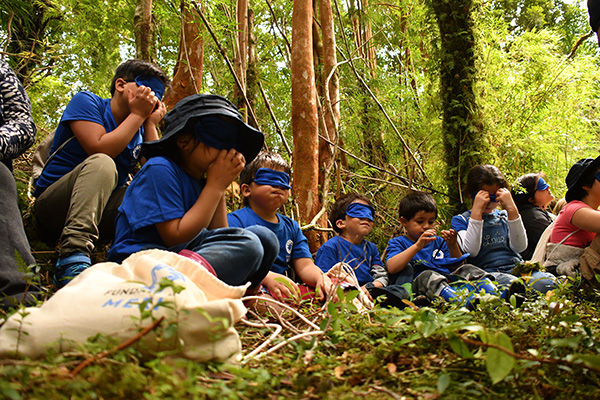 All of which makes the territory a keynote space for ecosystem conservation, into which step the amazing folk at Fundación MERI – or Melimoyu Ecosystem Research Institute – a non-profit foundation focusing on “world-class science and environmental education”, as described by Plastic Oceans International’s Regional Director for Latin America, Mark Minneboo.

MERI, in fact, are a recently engaged partner with Plastic Oceans in their BlueCommunities initiative, on Chile’s Chiloé Island, 200km north of Melimoyu. From August 2 – 8, 2021, the island hosted the hugely inspiring Trees & Seas festival, a weeklong program with accompanying global events which conceptually – and practically – brings together ocean and forest conservation.

MERI came into being nearly a decade ago with the inspirational vision of Francisca Cortés Solari, who recognized and identified that the Melimoyu ecosystem was a unique space crucial to systemic conservation in a region already unique by international standards. Solari then established a scientific center for investigation in order to better understand the ecosystem, but also advocate on its behalf using key data and statistics. It was there that MERI and the 17,000 hectares it is responsible for began its ambitious trajectory.

Key to their development – and continuing the BlueCommunities focus on genuine community participation – is the fact that MERI doesn’t simply engage in science for data and advocacy, but also to bring it to the forefront of local environmental education. In particular, the overriding focus of this education is to make studies and knowledge relevant to the region and of service to the community.

“These are our three key areas of focus,” emphasizes Ana María Molina, Executive Director of the Foundation. “Scientific investigation which leads to environmental education and is all wrapped up in long-term engagement with our local communities.”

It is a strategic structure which led directly to the development of MERI’s highest profile project, the Blue BOAT Initiative, ostensibly a system of collision avoidance between local vessels and the emblematic Blue Whale to which the region is home.

“The Blue Whale was our initial spur towards conducting summer expeditions as of 2014,” explains Molina, “linking our team of researchers with specialist international scientists in the study of this amazing mammal and other cetaceans. The work establishes what species are present, and their relative health and behavior, using passive, non-harming acoustic technologies and GPS markers. Through these endeavors we have succeeded in establishing an early warning system which boats can use to preempt collisions between their vessels and the creatures, collisions which proportionally account as being a very high indicator for strandings and deaths.”

In association with this program, MERI has also drawn a line directly between whales and the services they perform for ecosystems, including as a species mitigating naturally against climate change by capturing carbon. This occurs in a variety of ways but includes in their own carcasses after death, where carbon can remain stored for centuries, but also by generating phytoplankton blooms with their excrement which serve as vast carbon stores.

“We know that to generate change towards sustainability we need the participation and collaboration of society across all its sectors,” says Molina, “and alliances are so important in achieving this. Our partnership with Plastic Oceans speaks to this understanding, from when we first started working together in 2018 right through to this year’s Trees & Seas festival. We both recognize that communities – and each person in each community – is a part of the solutions we need – and we seek to catalyze these agents into action. It’s a relationship which is only getting stronger.”

Much the same could be said of MERI and Plastic Oceans working together in the BlueCommunities program, inspiring people, using individuals as in-community advocates to demonstrate the possibilities of change – arguing that all individuals have a vested interest in progressive change. That whatever a person’s background, or work, or belief system, or even motivation, catalyzing environmental custodianship is something we all share and can all get behind.

Increasingly, it seems, Patagonia is not just synonymous with some of the most amazing landscapes on earth – at what we generally conceive to be the ends of the earth – but also is beginning to represent and be represented by an organization with a clear and overriding vision of what we can achieve when we work together and refuse to accept defeat as an option.

Who would have thought – eight years ago – that the Melimoyu Ecosystem Research Institute would be such a beacon of possibility, in Chile and now internationally.

MERI: four letters that have come to spell something like Hope.

Jon Bonfiglio works in sustainability with Ninth Wave Global and covers news & environment for a variety of media outlets internationally.