The Plastic Oceans International team is delighted to learn of the ambitious efforts underway to eliminate 99.4% of single-use plastic items at Hard Rock Stadium, home of the NFL’s Miami Dolphins.

Hard Rock Stadium, in Miami Gardens, Florida, holds an iconic namesake, and thanks to the power of great media content – in this case, a 60-Minutes story about marine plastic pollution – it will also hold an iconic place within the sports and entertainment industry as a true leader in the fight to curb our addiction to plastic.

Upon seeing the 60-Minutes piece, which aired on August 18, 2019, Tom Garfinkel, vice chairman, president and CEO of the Miami Dolphins and Hard Rock Stadium, was shocked by what he saw. Garfinkel was taken aback by the images of plastic waste floating in the Pacific Ocean. Instead of just letting the moment pass, with no second thought given, he decided to take action. The power of content to influence opinion and behavior was at work. 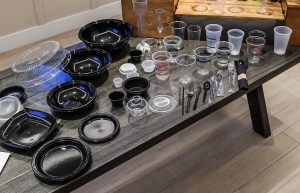 Within days, he had formed an internal action committee at the stadium that was tasked with devising a plan to eliminate single-use plastic from their facility, with a goal of doing so before hosting the Super Bowl, on February 2, 2020. Certainly no small order, considering that solutions for replacing nearly three million single-use plastic items used per year had to be found and implemented in just a matter of months.

“Imagine the scale of that task,” said Julie Andersen, Global Executive Director of Plastic Oceans International. “This shows us all that multiple stakeholders can indeed come together to create a series of solutions that lead to meaningful change. We know this is but one small drop in the bucket to solving plastic pollution, but buckets only get full one drop at a time. Each one is needed and each plays an important role in the final sum. Thus, we support this initiative and hope that more facilities and organizations will take notice and implement the same measures.”

Andersen also points to the fact that this effort highlights the reason that Plastic Oceans is primarily focused on creating content to achieve its mission:

“This is a great example of good content – in this case from 60-Minutes – influencing how an individual thinks about their relationship with plastic, which in turn has lead to a wider initiative, at the organizational level, that has the potential to influence change within hundreds of thousands of people every year. This is exactly why we pursue and value the creation of film and other digital media that can inform, engage and inspire.” 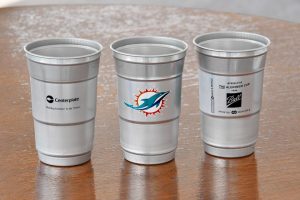 Hard Rock Stadium was already well on the way to being a green-friendly venue. It’s a member of the Green Sports Alliance, actively composts waste, donates excess food to local missions, provides employees with refillable water bottles, has a no plastic straw policy, and utilizes waterless urinals, energy-efficient LED lighting and mobile tickets and payments.

“If we do something at the stadium and can set an example, what kind of larger impact can that have?” Garfinkel said in a  interview with Forbes. “We have an opportunity, because of the scale of what we do at the stadium, to make a change. This isn’t a political thing and it’s not if you drink out of a plastic bottle you’re a bad person. The volume we do here creates a lot of plastic so if we can change that, we’re making a big difference.”

If all goes well, February’s Super Bowl will have the lowest carbon footprint in the history of the event. For now, we’ll wish them well in that pursuit, while fully supporting their organization’s push to implement programs to nearly eradicate single-use plastic from Hard Rock Stadium. It’s a big task to have pulled off in just a few months, so congratulations to Tom Garfinkel and his entire team.