The Weight of Humanity vs. The Natural World

It’s no secret that our human impact on Earth is greatly reshaping our shared experience – and often not for the good. Extinction of species, scarce drinking water, polluted air, disease-causing chemicals, more CO2, climate change, and … well you get the idea.

Sure, we’ve done some great things as well, but it’s hard to look past the damage that we are increasingly responsible for. As our species has “advanced” to the top of the food chain, so too has our appetite for things and the production and infrastructure required to satisfy our need for those things. And it is a BIG need – a hunger that has driven an addiction that recovery might never come from.

Sound a bit dramatic? Some might think so, but have you ever really tried to comprehend the magnitude of all this “stuff” that we produce? Look within just a few meters of where you now stand or sit. Take in every human-made thing you can see: sidewalks, buildings, boats, cars, cell phones, computers, plastic waste and more. Our human footprint is everywhere, yet the vast majority of us rarely take notice of it.

Thankfully, a group of researchers from the Weizmann Institute of Science, in Israel, has indeed taken notice. In a new study published in the journal Nature, they conclude that the weight of human-made materials – called anthropogenic mass – now surpasses, or soon will surpass, the mass of all other living beings on Earth (it has +/- of six years). 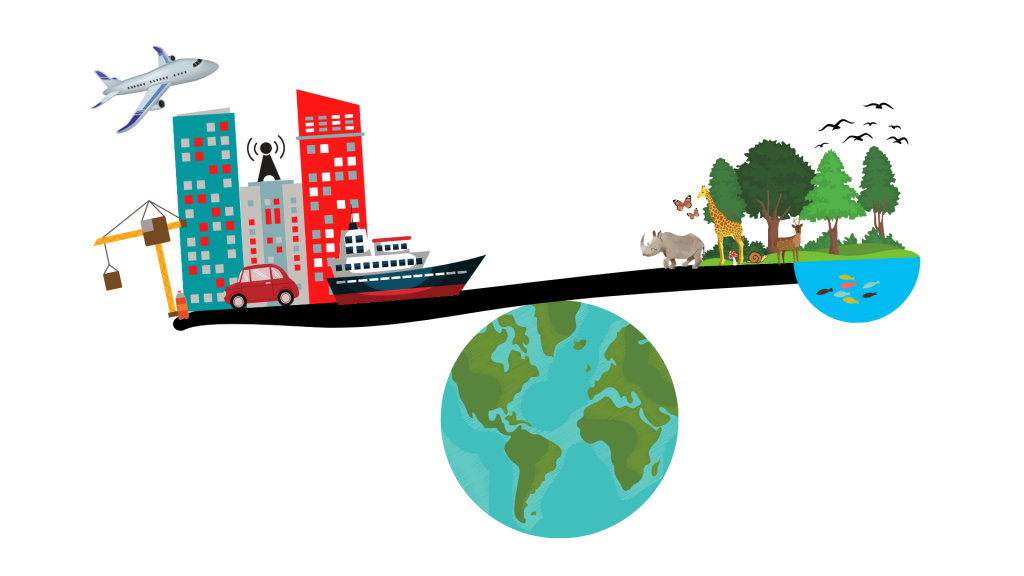 “We’ve done it. We finally produced enough materials to equal the entire biomass of the planet we call home. The problem is, we don’t have room for it,” said Dr. Charlie Rolsky, Director of Science for Plastic Oceans International. “The expected exponential growth of anthropogenic mass obviously mirrors what we expect for plastics in the coming decades. Nothing about that is sustainable.”

The study points out that in 1900 our human-made materials were only 3% of the total global biomass. My, oh, my, how far we’ve come in just 120 years! To catch up to our natural brothers and sisters, our production and accumulation of things has doubled every 20 years during this period.

Think about that. Munch on it a bit and consider the ramifications of the output of human activity. For example, how much of our planet has been consumed or destroyed in order to feed our human need for stuff. How much of this “stuff” is truly a need versus a desire?

Those questions above, and even the study itself, are ripe for debate, but certainly worth a look and/or a good conversation with others when this damn pandemic ends. For now, let’s have a look at some of the eye-opening facts from the study:

THE WEIGHT OF EVERY HUMAN

Is equal to human-made things produced every week.

The most common human-made material.

The most common biomass material, accounting for over 90% of the total.

Since the first agricultural revolution over half of all plant mass has been lost.

Than the mass of all living animals.

We in the plastic pollution field often cite the belief that by 2050 there will be more pieces of plastic in our oceans than fish swimming in it. But look at that last piece of data. RIGHT NOW there is twice as much plastic mass on Earth than that of all animals roaming the land or swimming in our waters! That’s mind blowing to me.

Equally mind blowing is the fact that waste is not included as part of the anthropogenic calculation. Researchers defined “waste” as human-made mass that has been demolished or taken out of service. If waste is taken into account, the researchers believe anthropogenic mass surpassed biomass around 2013.

It’s important to note that there are a lot of variables in the study, which means that the findings are not concrete (how could I resist?!?) and certainly open to varying conclusions. But have a look at the full study or read some of the media coverage: CNN, The Guardian, Scientific American. Absorb it and see what conclusions you come to.

Tod Hardin is the Chief Operating officer of Plastic Oceans International. He has over 25 years of communications and marketing experience at senior levels, and has been involved in various environmental causes and organization throughout his life. He is the director and writer of the forthcoming film Against the Current.