Six Weeks of Environmental Documentaries to Inform and Inspire

For 6 weeks between mid January and the first week of March, international environmental films will screen alongside the Green Market inside Campeche, Mexico’s historic walls.

“You build with people, not programs.”

Tod Hardin, CEO of Plastic Oceans International, stands in front of a 500 year old fortification in southern Mexico, and – despite being a resident of Detroit, not known for its balmy winters – shivers in the low light of this Mexican tropical January. It’s a particularly chill night in these parts, with a northerly blowing in, and still 25 people or so are sat inside this most amazing of historical architectural achievements, watching South African inspiration, Sarah Ferguson, swim round the iconic Pacific island of Rapa Nui.

Rapa Nui, a full 3,500 miles (5500km) away from Campeche, mostly over the cast Pacific Ocean, and Sarah Ferguson’s own Durban, South Africa, another 9,000 miles (14,000km) and plenty of Atlantic Ocean further on, and yet these three locations are connected more than ever as are all seminal members of Plastic Oceans International’s BlueCommunities initiative, bringing together active change-making communities from across the globe into a cohesive and meaningful community of like-minded partners.

Eating Up Easter, an award-winning documentary about sustainability on Easter Island, screened on January 29.

Which makes this superficially strange juxtaposition not odd in the slightest when you consider that everyone involved in this first BlueCommunities Environmental Film Festival – whoever they are and wherever they spring from – is in fact an individual or organization drenched in the realization that the status quo is not a viable option, and that we are capable of so much more than this.

“Grassroots is such a buzz phrase,” said Hardin, “but so often it’s misunderstood, and taken to mean coaching or teaching at ground level, where really it’s never been about telling, but about inspiring and offering opportunities. So here we are, with the Mercado Verde of Campeche (Green Market of Campeche) right here alongside us, where they are every Saturday in the Plaza Juan Carbó in the historic heart of Campeche, projecting contemporary environmental films onto one of the oldest post-colonial structures in the Americas. Free, open-access, accessible to all.”

Hardin is a film buff, by his own admission. Hearing him talk about the moving image is to listen to a veritable kaleidoscope of cinematic history, and there is little doubt that his sense is that film – above all other mediums – has the capacity to inspire us to be better, collectively.

“Plastic Oceans is about film. I am about film. Which is not to say that there are no other mediums out there, but film… it has an innate ability to get to the heart of the matter, to show ourselves right back at us. There on the screen, Sarah Ferguson is swimming around one of the most remote islands on earth, but of course what we are seeing is us, our capacity to build great big castles in the sky, and inspire others. This is what BlueCommunities is about; this is what this environmental film festival is about.”

Ferguson, who is the founder of Breathe, which is a BlueCommunities member organization, and also the subject of festival film, Against the Current, agrees and offered the following: “The film festival is a great extension of the BlueCommunities concept. For me, knowing that my story is being shared and experienced by others on the other side of the globe – and hopefully inspiring somebody to make a difference – is empowering and motivating. It helps us all feel a bit less isolated, interconnected in our collective goal of creating healthier communities worldwide.” 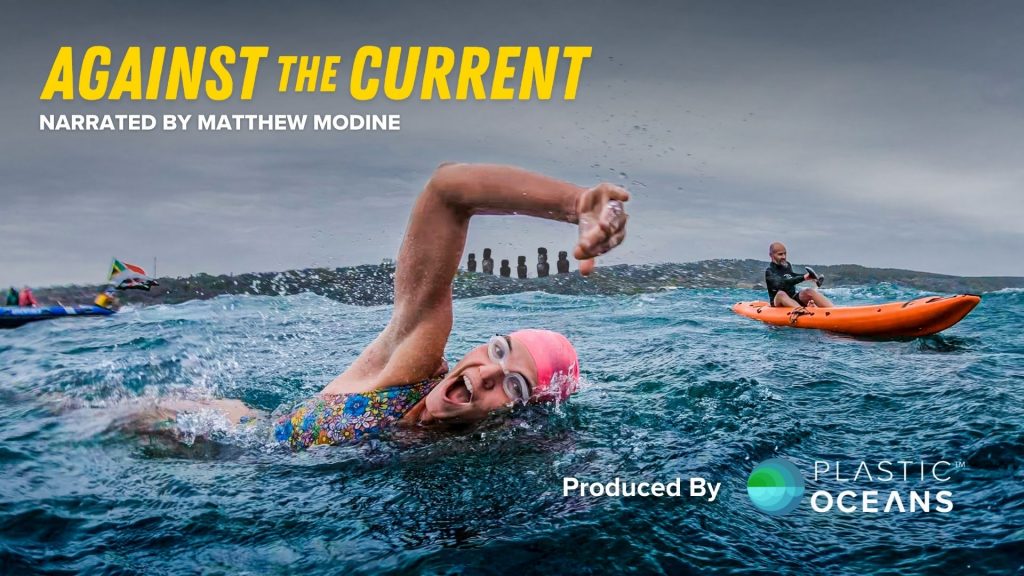 Against the Current tells the story of Sarah Ferguson’s attempt at a human first swim.

With screenings every Saturday at 6pm until March 5, projected onto the historic wall which surrounds this UNESCO World Heritage City, from local and international partners alike, this is a festival for a local audience, but it is also a drawing together of the BlueCommunities family.

Whether it be the seminal documentary Kiss the Ground (USA), or the amazing stories and cinematography from Fundación MERI’s (Chile) film collection, or Hardin’s own film from Rapa Nui, the chosen movies present the very best of us in a context of environmental crisis, always representing what we can do when we put our minds to making change happen, to presenting the best versions of ourselves.

It’s the first BlueCommunities Environmental Film Festival, but highly unlikely to be the last!

Against the Current (USA)

(canceled due to weather, moved to March 5)