To celebrate Tommy Hilfiger’s 25th anniversary in Mexico, the clothing brand and Plastic Oceans Mexico teamed up to carry out Swim Against Plastic Riviera Maya. This event was organized  in order to raise awareness about the excessive use of disposable plastic, the excessive amount of pollution that results, and its impact on the environment and people’s health. 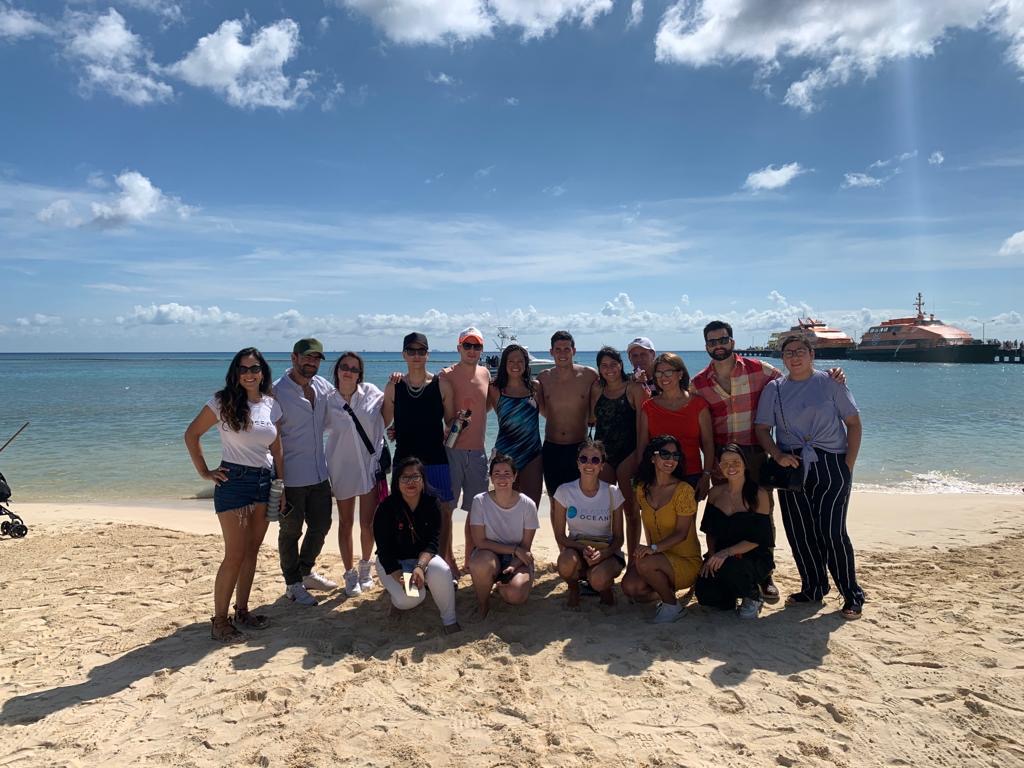 The goal of Swim Against Plastic is to inspire people to rethink the use and disposal of single-use plastic, empower them to change their habits, and incite them to be part of the solution. The Riviera Maya has been negatively impacted by the improper disposal of single-use plastics, just like many other rivers around the world. This diverse paradise of flora and fauna is also being severely hurt by population growth, the growth of the tourism industry – especially the cruise ships that reach many of the beaches along the state of Quintana Roo – and the bad management of solid waste, which includes excessive  amounts of single-use plastics. The consequences of these factors worsen the poor conservation and maintenance of the protected natural area of ​​Sian Ka’an and its neighboring communities.

Why did Plastic Oceans choose the Riviera Maya and not another place? We  carried out the campaign on this Mexican coastline due to the high amount of plastic pollution that reaches the beaches from strong ocean currents, which travel from all over the world. Then, add to that the tons of garbage, including large amounts of single-use plastics, left by cruise ships every time they reach port and you can begin to understand why we chose this location

The reserve of Sian Ka´an is considered a protected natural area. However, it is not maintained and cared for as it should be. This area is located just between Punta Allen and Tulum, on the way to Playa del Carmen. Environmental conservation regulations set for this oasis are constantly being violated. Since many of the beaches in this protected area are not visited by many tourists, it is largely overlooked in regards to plastic pollution. Consequently, the general public outside of the local community, as well as the rest of the world, are not very aware of the damage that this area is suffering from.

It is here, in this part of Mexico and other like places in the world, that we need to have difficult conversations in order to raise awareness about the plastic gathering on the shores and in the waters of the Riviera Maya. It is unfathomable to think that an area where humans have very limited access, and is supposed to be a protected environment, has become highly contaminated by this global problem of plastic pollution. Sadly, this type of scenario is more common than most of the world thinks. For that reason, we wanted to bring the eyes of Mexico and the world to the Sian Ka´an area to  help understand the plastic crisis from a different point of view. The crisis in this area is one that, if it remains unseen, people may continue to believe does not exist. 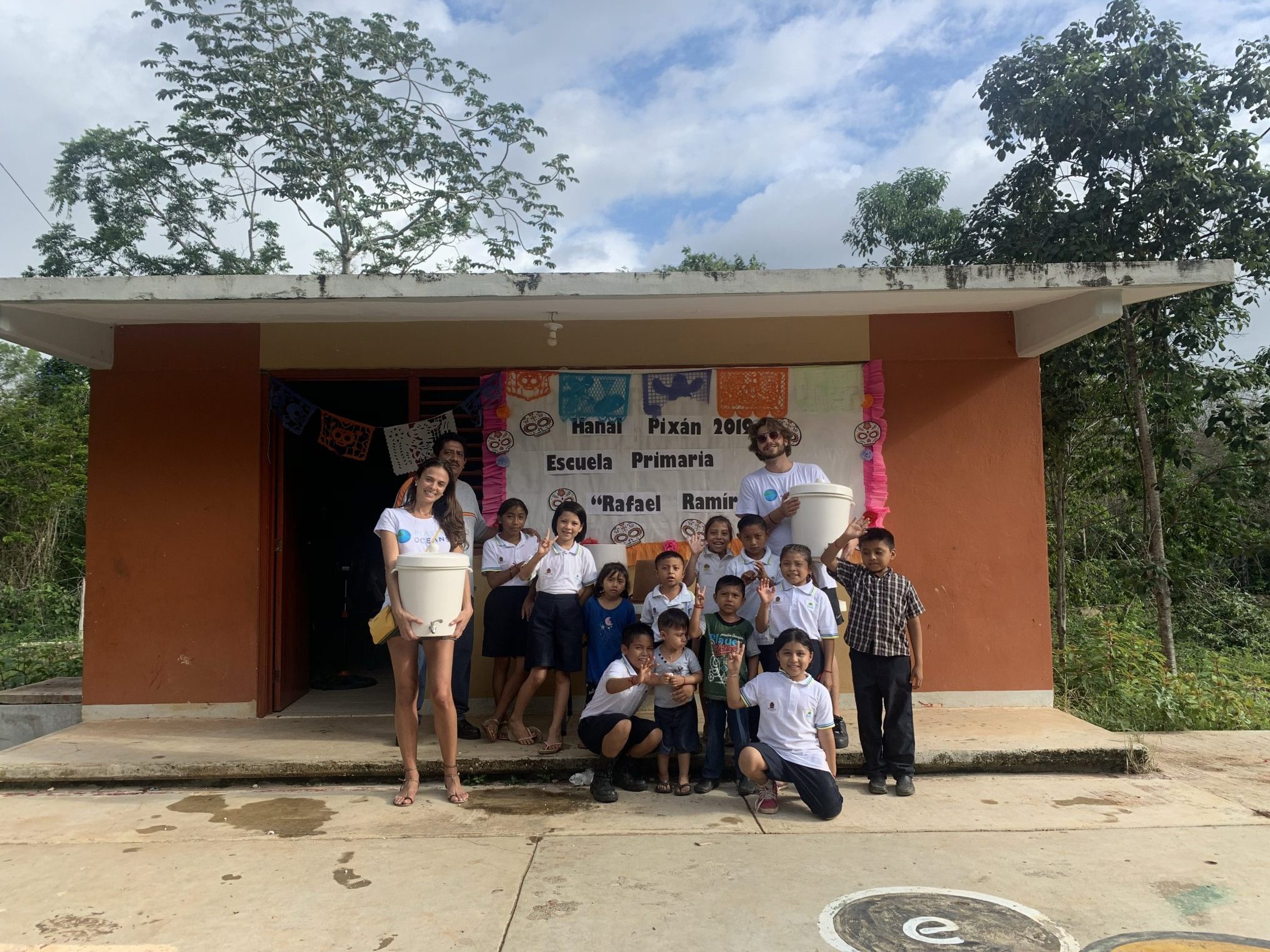 One of the Rethink. Refill. participating schools.

This Swim Against Plastic was a wonderful event and only possible because of the constant support, passion and love that each of the participants, Plastic Oceans Mexico, and Tommy Hilfiger gave to this cause. The event lasted three days, from November 7 to 9. It included educational activities, environmental activism, and an attempt at a world record swim featuring three Mexican swimmers; Karina Almanza, Roberto del Río and Mariana del Río.

On November 7, Plastic Oceans’ educational program, Rethink. Refill. was initiated  in collaboration with the Byanni Luneza foundation, in the communities of Tres Reyes and Chumpón, in the state of Quintana Roo, near the Sian Ka’an preserve. This educational event was attended by more than 70 children and their parents. Water filling stations were installed and stainless steel refillable bottles were donated to encourage the community to rethink the use of disposable plastics, encouraging a  habit of refilling bottles instead of using plastic bottles and disposing of them after one use. 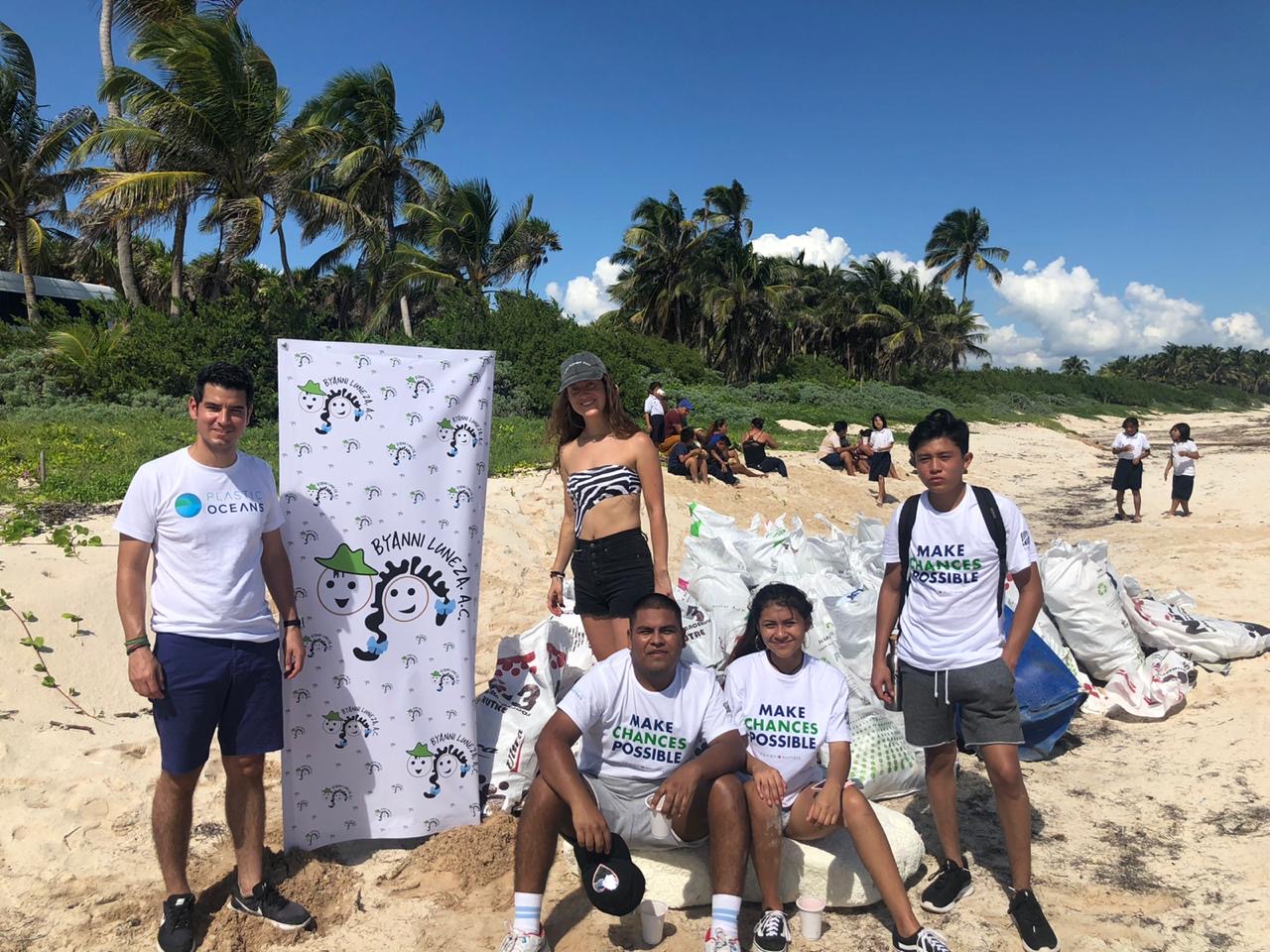 On November 8, a beach clean-up spanning two kilometers was executed within the Sian Ka´an reserve. Thanks to the extraordinary energy and motivation of more than 50 volunteers from Punta Allen, Tres Reyes, Chumpón, Playa del Carmen, and Tulum, almost 500 kg (1,102) pounds of garbage was collected. Among this trash we found large pieces of plastic such as tires, buckets, detergent containers, shoes, children’s toys, as well as smaller pieces like toothbrushes and even syringes. What never ceases to surprise and terrify us, is the seemingly infinite amount of microplastics we also find when doing beach clean-ups.

Before that, at 2:30 a.m., Karina Almanza, the first swimmer in the relay, began swimming from the lighthouse of Punta Allen. She was in the water for more than six hours fighting a most unusual current. Experts and locals reported that this is known as “Mahashé” and to encounter it is a most unfortunate occurrence in the waters of Riviera Maya. The current, flowing from north to south, had a speed equalling 6 knots, dangerous to any swimmer going up against it. This current made it impossible for Karina to continue with the swim since her safety was at risk. After assessing the situation with experts that were on hand, it was decided to postpone this symbolic swim until the following day and cut the length of this challenge from 120 kilometers (74.4 miles) to 42.3 (26.3 miles).

On the 9th of November, at 6:00 a.m.,  Karina Almanza, Roberto del Río and Mariana del Río, began the amended relay swim from Puerto Aventuras to Playa del Carmen and finished the last kilometer together, to celebrate the culmination of this great event.

The swimmers were welcomed and embraced by each individual who was part of, and made this project a reality. Plastic Oceans Mexico and Tommy Hilfiger gave a few words of thanks, sharing the stage with Abi Márquez of the United Nations, who gave recognition from the “Clean Seas” campaign to each of the swimmers and congratulated the organizers for the initiative to integrate brands like Tommy Hilfiger with a cause that seeks to raise awareness and incite action on the plastic pollution crisis that Mexico and the world face.

“We could not be more proud of our swimmers for their leadership. The planet needs leaders that encourage changing the habits of society to help solve the problem of plastic pollution. It is only through the integration and cooperation of all sectors involved that we can really solve this problem at its root. We are happy that brands like Tommy Hilfiger are increasingly involved in these types of educational initiatives and projects,” said Mariana Soto, Executive Director of Plastic Oceans Mexico.

Throughout the event we also had the support of our Swim Against Plastic Riviera Maya Campaign Ambassador, Arturo Islas Allende. He is currently working on numerous initiatives regarding the environment in Mexico. Mr. Allende said, “I want us to be an army of change, our responsibility starts from our home and we can help organizations like Plastic Oceans Mexico go further.”

This project accomplished more than we first imagined. Though unable to complete our initial goal for a world record three person non-stop swim of 120 kilometers, we set more records for smiles and happy hearts. Hearts that were inspired and full of energy to seek out  a change. The community is now in search of a world free of plastics. We want to thank all those who collaborated and supported us in being able to realize this dream project and take our message even further.

We are grateful to ADO Transportation. Without their support, we would not have been able to transport so many people willing to support our cause to all the  events attached to this Swim Against Plastic. We want to thank the Ahau Collection group, who gave us a roof over our heads to continue working after hours when we should have been sleeping. We also can’t forget SOFIMEX, for their great support, and of course, Tommy Hilfiger.  We had an incredible experience with the Hilfiger, learned a lot from them , and will cherish the memories of some great teamwork on this event.

There is much left to write about as to what this event began as and in what it turned out to be. There were days of extreme effort and total fatigue, but there were also days full of magic and unconditional support from so many individuals, that there are not enough thanks that we can  give.

Stay tuned for more blogs to come that will give more detail on all of the events this project encompassed.

Thank you so much once again to all involved for becoming a part of this community of change with us.