The Underappreciated Importance of Mangroves

Mangroves. That most unique of ecologies, straddling water and land; a literal border between systems, generating its own along the way – semi-aquatic forests that consist mostly of submerged vegetation, generally existing on the boundaries of seas and other wetlands. 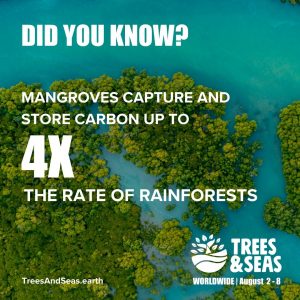 This underappreciated ecosystem has the potential to provide greater environmental services than even the tropical rainforest, with the ability to sequester carbon at two to four times the rate of rainforests. Moreover, these ecosystems contain high levels of biodiversity and often provide habitat to endangered species and culturally significant megafauna. For these reasons, preserving and rehabilitating mangroves represents a key facet of mitigating the impacts of the climate crisis as well as harboring some of the most emblematic species on earth, such as the jaguar.

Not only are mangroves key to protecting our planet against global warming, but they also provide a plethora of ecological services and support local human communities. These regions help maintain water quality through regular water flows and mixing; act as a buffer against storms and prevent erosion; provide nesting and feeding sites for a variety of animals; and contribute valuable resources to traditional communities, such as fish and timber.

In fact, because of the seemingly endless benefits intact mangrove forests provide to our environment and human populations, many governments and organizations have initiated concerted efforts to preserve and expand mangrove ecosystems.

One key case-in-point is Mexico. Containing an impressive 5% of all mangrove forests in the world, Mexico has the fourth largest concentration of mangroves on the planet.

“They are one of the ultimate expressions of protection and nurturing that nature has to offer,” says Salvador Avila, Executive Director of Plastic Oceans Mexico. “Mangroves are unique, amazing, and very, very special.” For this reason, endeavors devoted to mangrove protection have become key to environmental conservation in the country. 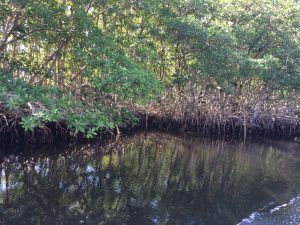 Specifically in Campeche – the state with the second largest area of mangroves in Mexico – much attention is being placed on the conservation of the Los Petenes region, an extensive network of mangroves that covers 282,857.62 hectares in total and spreads over 72 kilometers [44.7 mi] of coastline. The Los Petenes biosphere (La Reserva de la Biosfera de Los Petenes) exists on the northern coastline of the state, extending into the Gulf of Mexico. The area’s name hails from the many vegetated islands – petenes – that make up much of the mangrove ecosystem and provide crucial habitat and fresh water to a variety of terrestrial and marine species. Many of these species are endangered or endemic to the region, with 34% of the mammals in Los Petenes falling into a risk category.

The most iconic creature in the biosphere is undoubtedly the jaguar, an endangered species that has been thriving in Los Petenes. Lina Nah of the Mexican National Commission of Natural Protected Areas (CONANP) notes that jaguars and their cubs have been observed with camera traps across the region. These sightings serve as an indicator of the great relative health of this mangrove ecosystem as jaguars, being apex predators, will only flourish in areas of broad ecosystemic abundance.

Not only is this mangrove ecosystem crucial to mammals, but also an astounding 295 species of birds, including local and migratory residents, and at least 47 species of fish. The region also houses 30 species of reptile and represents a nesting site for the Carey Turtle, which is a critically endangered species. Apart from the richness of wildlife in the region, many artifacts of the ancient Maya community have been found within the ecosystem, inviting opportunity for further cultural investigation.

While the Los Petenes biosphere clearly abounds in magnificent environmental and cultural features, the region is currently facing a variety of threats that endanger the integrity of the ecosystem. Even though no agricultural activity is allowed in the area itself, the expansion of agricultural and livestock production around the region causes polluted factory runoff to flow into the waters of Los Petenes. Within Los Petenes, activities such as illegal logging, hunting, and overfishing of species, such as octopi, jeopardize the continued survival of mangrove wildlife. These practices often have the dual effect of provoking forest fires, which are currently the main source of mangrove cover loss in the region.

Despite these mounting challenges, Lina Nah remains confident in the current state of conservation in Los Petenes and the abundant value this ecoregion provides.

“It’s a pristine area because access is very limited,” she says. “It’s one of the protected areas with the greatest amount of scientific research being done just because of this characteristic that it has. The level of conservation is still good.” 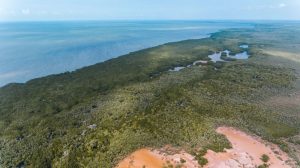 By continuing this limited access and use of the ecosystem and raising consciousness of the importance of mangroves, the CONANP and other community members will be able to safeguard this ecosystem for humans and natural components alike.

And safeguarding this ecosystem punches far above its weight in terms of net positive effects. The protection of a not-so-small area of mangrove in the southern tropics of Mexico clearly has a necessarily local effect, but the scale of mitigation which mangrove forests provide us are a key asset in the fight against the coming climate crisis. As Salvador Avila notes: “mangroves are a reminder of the delicate balance we tread with the environment: massive, strong and resilient to the storms, but fragile, easy to harm and slow to recover.”

We can see that our willingness to actively steward mangrove regions says much about our collective environmental future: conscious protection of these especially complex, rich ecosystems can create a ripple effect, inspiring targeted action that extends to all our world ecosystems.

No matter if you are thousands of miles away from the Los Petenes biosphere, the life this region sustains is key to the continued health of the planet. As a master of both self-regulation and regulation of our climate, we depend on mangrove ecosystems such as Los Petenes.  In a coastline replete with mangroves, we can see the ideal environmental future we must work for in all ecosystems: clean waters; abundant wildlife; and safe, nourished human communities.

Sophie Liebel is part of the environmental journalism team at Ninth Wave Global. Originally from upstate New York, she is an avid birder and wildlife advocate.