The island of Rapa Nui (or Easter Island) has captured the attention of thousands of people through its mysticism, culture and the enigmatic, well-known statues called ‘moai’. However, the passage of time, globalization, and the growing tourist industry on the island, has caused its traditions, language, and culture to be in danger of disappearing. However, for the Rapanui people this is not an option. Different efforts have been made to keep their ancient culture alive, by creating opportunities for reunion and teaching new generations about their roots.

One of these organizations is the NGO Toki Rapa Nui, who have worked to unite their community, and tourists from all over the world. They aim towards their legacy of being the first sustainable music school in Latin America. There is no doubt that their work is worth exploring, and we already knew this before our trip to Rapa Nui in March 2019, for the Swim Against Plastic challenge. So we had conversations with the founders and agreed to visit them and do some activities together. What we didn’t know was that we would have some very special experiences there. 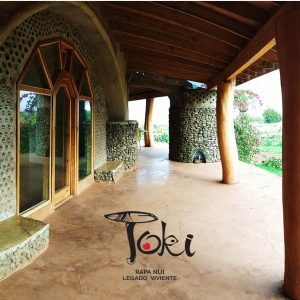 Toki is not only a place that represents sustainability in all its meanings, but it is also a place filled with the mana (energy) of the island. We knew about Toki, as part of the preparations for the swim of Sarah Ferguson, in March 2019. When we were coordinating logistics and possible allies on the island, we contacted Enrique Icka, one of the founders of the school. One thing led us to another (as always happens to us), and we ended up managing the premiere of the documentary “Eating up Easter” in the music school, for which we had full support from the team, creating an event filled with emotional connection between those who were present.

The day before Sarah Ferguson, a professional swimmer from South Africa, began swimming around Rapa Nui’s island, Toki became an essential part in this goal she attempted to achieve.

In the afternoon of Thursday, March 14th of 2019, we were talking with Mahani Teave and Enrique Icka, co-founders of Toki. When we mentioned that Sarah was going to attempt to do the swim the next day, Enrique made a face and thoughtfully said “Ok, but we have to ask the spirits of the island for permission first. Meet us at Toki this evening, we will make an umu for Sarah and her team.”

That afternoon, the whole Swim Against Plastic team, friends from Kayak Rapa Nui, and some of the people who were at the school at that time, gathered in a circle to share a ‘curanto.’  Singing ceremonial songs, we asked the spirits of the island for their permission and protection. It was a moment that marked a before and after, and we believe that every single person who was there, agrees that this ceremony was a key part for Sarah to achieve her goal. Sarah succeeded, exceeding all expectations and establishing a new record, and the rest is history … (learn more about this challenge in Sarah’s own words HERE). 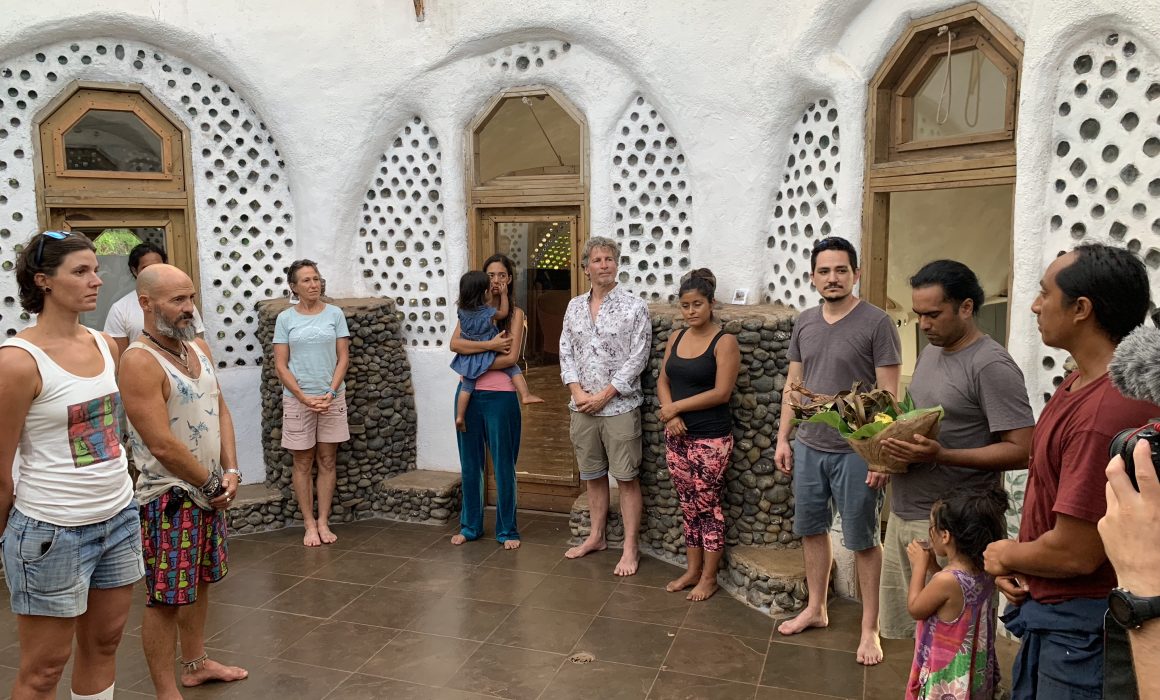 Ceremony for Sarah Ferguson before her world-record Swim Against Plastic around the island of Rapa Nui.

But our relationship with Toki did not end there, because the important work they do on the island continues daily, and we wanted to share with you more about them and give them a podium to communicate their message to the world.

Toki Rapa Nui was born in the year 2012, when its founders realized the need to give the people from Rapa Nui opportunities for learning without the necessity of leaving the island. Since being the most isolated inhabited island on Earth, many elements of first need must be imported, and opportunities are scarce. This is why they decided to give free music lessons to the kids on the island, as a way of empowerment, and to develop their talents without the need of leaving their home.

Music is an important means of communication for the Rapanui people. It expresses their teachings, sorrows and joys, and transfers wisdom and experiences along to new generations. Children have a deep connection with music. Knowing how to play an instrument or singing is part of what they are, and by teaching them different techniques and instruments, Toki wants to give them the tools to express themselves and tell their own story. 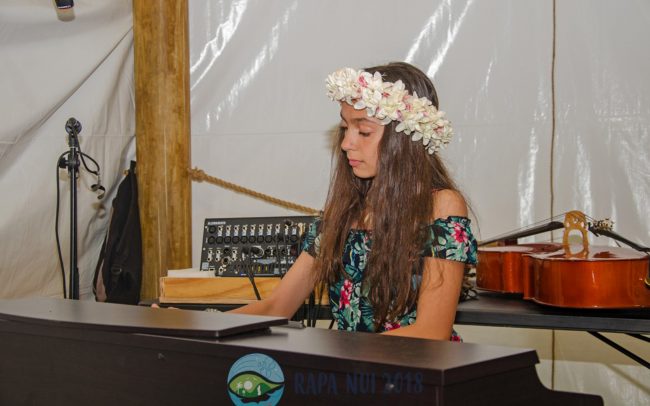 “They learn an incredible amount of values with music like respect for themselves, their peers, and teachers. Also Perseverance and discipline, that in the end, are tools that serve you for life. The very fact that they are learning piano or violin, next to the ukulele or the guitar, show their colors, varieties, and ways of expression… That brings out the creativity of the children, and for us that is the most important thing… to give them spaces and places to express themselves, to be themselves, to develop their talents, those spaces that did not exist here before ” says Mahani Teave, an internationally renowned concert pianist, who, along with Enrique Icka and Mario Tuki, is a founder of the Toki project.

Construction of the first sustainable music school in Latin America

One of the pillars of Toki Rapa Nui is sustainability, which is fully reflected in what was the construction that today houses the Toki Rapa Nui’s Development Center.

The building was imagined as an Earthship Biotecture, an innovative proposal for construction using waste materials – such as tires, glass bottles and aluminum cans. It is the brainchild from acclaimed American architect, Michael Reynolds. 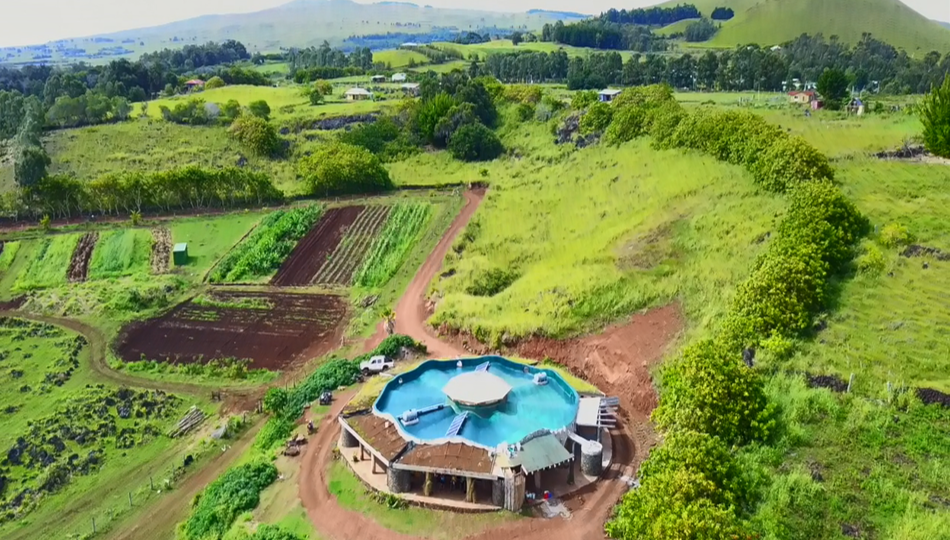 In order to obtain the funds, a worldwide Crowdfunding campaign was carried out, a process in which they had the support of hundreds of people worldwide, from Eminem’s producer to the greatest faces of learned music, they joined the call to donate. People from all over the world raised a support flag that said “I also want a music school in Rapa Nui.” This synergy of people and wills yielded the results that in 51 days they raised about 40 million Chilean pesos  (around $55,000 USD).

One of the biggest challenges was bringing in the construction materials. Since the island has no major port, it was impossible to do it by sea. But the magic of good causes can make miracles.  The organization Desafío Levantemos Chile saw the project and put all its logistics, people and financial support behind helping move materials and constructing the building. In addition, the telecommunications company, Entel, donated the money needed to finance the total purchase of materials. The Government of Chile also joined these great efforts, through the Ministry of Culture and the Municipality of Easter Island.

At the end of 2014, 200 volunteers from all over the world arrived on the Island, with the simple desire to help us realize what seemed like a crazy idea at the time. The volunteers lived in tents, donating their time, energy, and love. They were joined by people from the Rapanui community who also helped, and acquired knowledge of the Earthship Biotecture construction techniques. The entire Rapanui community gave their support, they opened their door to these foreigners who came to build their children’s School. The energy of each of the volunteers and donors is embodied in the school’s walls. None of this would have been possible without their help. 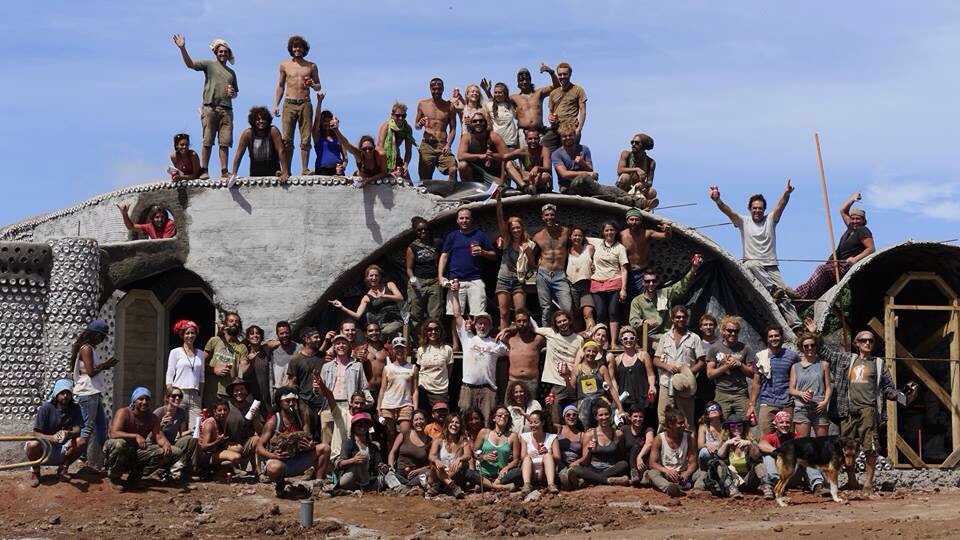 Volunteers participating in the construction of the center.

After finishing the first part and thanks to the knowledge that remained among the Rapanui,  volunteer groups continued to arrive and continued working. The finished building was inaugurated in April of 2016.

Toki’s message to the world

Seven years after the creation of Toki Rapa Nui, it can be said that a strong relationship with the community has been forged. It is reflected in the number of families who have relied on the education that Toki gives their children and their motivation to participate and replicate advances in the area of environment and sustainability in other parts of the island. Seeing that the community is empowering itself by learning agroecological practices that can solve problems, such as the available area for food on the Island. It can be said that  Toki’s Development Center is addressing several of the problems affecting the island today, working towards becoming a real solution.

We asked Carolina Campos, Executive Director of Toki Rapa Nui, what message do they have for the world, and she replied, “Toki is the word for the tool with which the moai were carved. Our message is that we can all be a Toki, each of us can carve the present of the world and the future legacy for all generations to come. The revolution is personal, each of us is called on to become agents of change for this planet that is collapsing. There is no more time. Let’s work collaboratively to carry this message to the generations that will be our next leaders.” 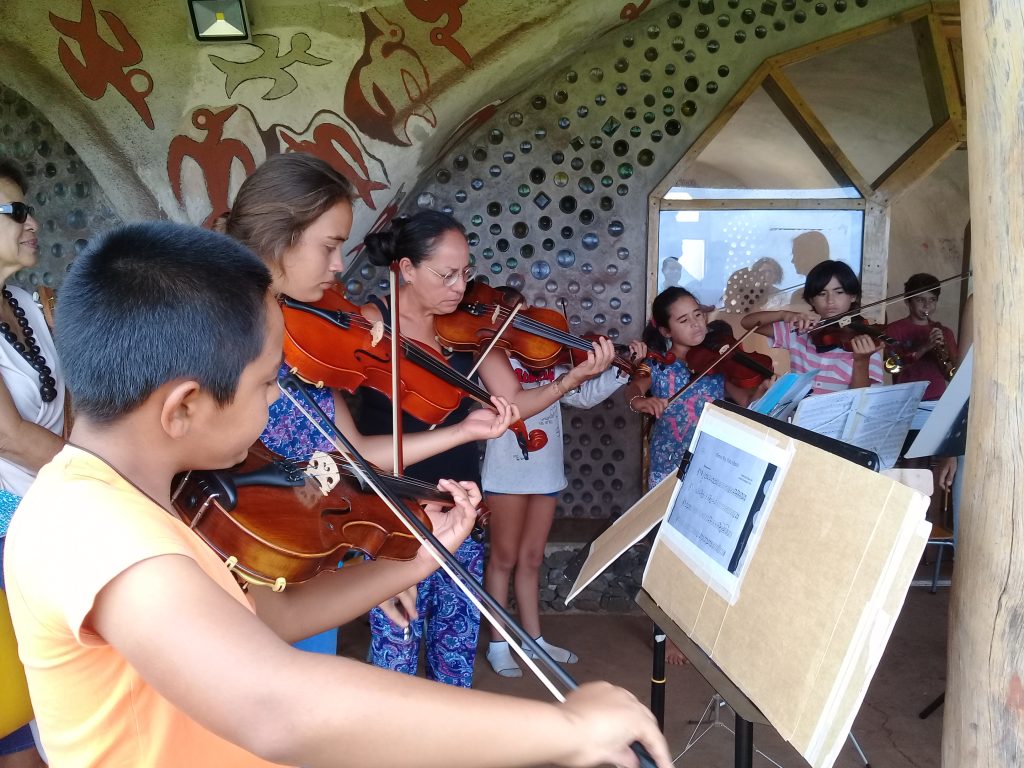 This is an  invitation to join this project by visiting, making a donation, volunteering, becoming a collaborating partner, or from other areas that you can contribute.

Follow the work, presentations and activities of Toki through its social networks, and to be part of this change and contribute with your donation. You can contact Carolina Campos, Executive Director of the NGO Toki at the email address: direccion.ejecutiva@tokirapanui.org or phone +56 93 4154413