“Against the Current” Coming to Film Festivals Worldwide

Wednesday, October 20, 2021, Malibu, CA – Plastic Oceans International is pleased to announce the world premiere of Against the Current, a feature-length documentary, narrated by actor Matthew Modine, that chronicles the story of South Africa’s Sarah Ferguson becoming the first person ever to swim around Easter Island nonstop.

Without being able to touch a boat or another person, Sarah’s daunting 40-mile swim was estimated to take up to 32 hours to complete, through strong currents, large waves, powerful winds and other hurdles along the way.  It’s a challenge she and a global team took on in March of 2018 as part of Plastic Oceans’ Swim Against Plastic campaign, which was created to raise awareness about the issue of plastic pollution and the need to protect our marine environments. 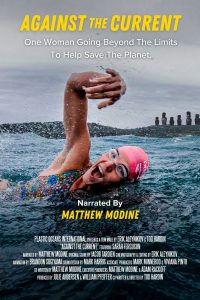 One of two movie posters for Against the Current. Photo: Wofty Wild

The film will make its theatrical world premiere as part of the Washington West Film Festival, screening at the Bow Tie Cinemas in Reston, Virginia, on Friday, October 22, at 8pm.

“After three years of hard work, it’s a delight to finally be bringing this amazing story of Sarah Ferguson’s physical endurance and mental fortitude to a live audience,” said Tod Hardin, the film’s director and COO of Plastic Oceans International. “It’s not just the story of Sarah’s amazing feat, but also one of a global team coming together for a collective cause. Being part of the festival’s Beyond The Limits double feature could not be more appropriate.”

Made in Chile, South Africa and the United States, Against the Current was filmed and edited by Erik Aleynikov; produced by Julie Andersen and William Pfeiffer; with Modine and Adam Rackoff serving as executive producers. It presents such themes as female empowerment, teamwork, sustainability, plastic pollution and human endurance.

“From my studies in oceanography and love for ocean activities, I have a deep connection and passion to protect her and the diversity she sustains,” said Modine. “I’m proud to be producing this film with Adam Rackoff and Plastic Oceans International to raise awareness about how important it is for each of us to enthusiastically and lovingly participate in protecting the earth’s oceans.”

Samantha Dols, Director of Programming and Impact, Washington West Film Festival, added: “We’re grateful to premiere Against the Current as part of our 10th festival — not only does the film capture a compelling story of human perseverance, it explores very tangible environmental issues that need our attention urgently. ATC represents beautifully our ambition as a festival, tapping into the power of filmmaking to catalyze productive change.”

Against the Current is the first of three feature-length documentaries coming from Plastic Oceans through 2022. The second, The Erie Situation, is in the final stages of post-production and will address the environmental and human health impact of agricultural runoff in Lake Erie; while the third, Cutting the Line, is currently in production and will tell the story of how thousands of seals are injured or killed by fishing lines along the coast of Namibia and the work of one local community to bring it to an end.

“Film is the art form that creates critical social change because of its power to both inform and inspire,” said Andersen. “We embrace the medium and strategically partner it with community activism and advocacy – driving social change until change is achieved.”

A US-based non-profit organization working to end plastic pollution and to foster sustainable communities worldwide. We operate with the belief that we can and must act locally in order to create change globally, and we do so through the power of film to empower and globalize community actions. In addition to their global entity, Plastic Oceans has branches in Canada, Chile, Mexico, Europe and the Great Lakes region of the U.S.