The Vision Of Three Artists

How does the ocean make you feel? Do you believe in the transformative power of art? How to combine both to inspire conservation?

These are some of the questions explored through the conversations and stories in this article.

We tend to seek the mystery and beauty captured in art, as there are manifestations of it all around. As the growing concern about the future of our planet is demanding new ways to reach people’s consciences, what role can art play?

At Plastic Oceans International, the link between art and conservation has already been addressed. Not long ago, the branch in Chile featured an article presenting the film project  ‘AIR(E)’ by Denise Lira Ratinoff, a call for people to reconnect with nature and learn about the threats to it. And Plastic Oceans International shared the story of Marissa Quinn, a surfer and artist who realized that her art could be a means to highlight current environmental issues.

The magic of art, and what makes it an exceptionally promising tool for conservation, is that we all actively seek it. Art does not attempt to provide complex data, facts, and figures. But in being there simply to be witnessed and to inspire, art can subtly send a message without appearing to do so. As a 2010 report on branding biodiversity reads, “Our audiences are emotional rather than rational […] we’re better off engaging and inspiring rather than informing.”

Many artists understand the potential of their work as a hook to bring the world’s attention to the challenges faced by our planet. Their creative processes are different. Their backgrounds are diverse. But they share a conviction that using their work to transmit powerful messages can positively impact our future.

Let’s hear some of their stories.

“Art is a tool to tell a story. It’s the artist’s responsibility to choose the story wisely.”

For Mia Raz, singer and songwriter from Poland, our connection to the ocean is linked to our human nature and reflects the cycles and flows of our lives.

Mia finds that her own connection to it began in her mother’s womb, where we were originally surrounded by water. Whenever she feels she is missing home, it means she needs to spend more time in nature and the seaside. That makes her feel immediately grounded.

“All of us, when we are by the ocean, experience something very strong. A self-awareness. And awareness of what really matters in the world. We realize that the things we are worried about are not that big and that there is more to life.” 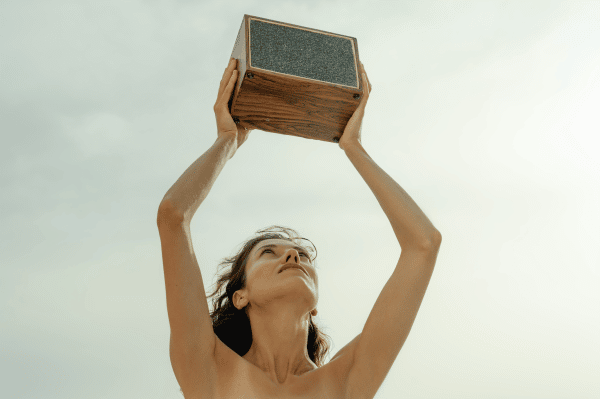 The singer recently spent time in Malta to find inspiration for her new album. Her song “M-Ocean”, which combines the words “motion” and “ocean” as one, uses the movement of waves and currents as a metaphor to convey the need to slow down and adjust our pace of living to our needs. It is inspired by her journey of self-love, awareness, and dance, and suggests that we should embrace change as it comes into our lives, instead of trying to control them. A problem that she finds common in Western societies.

“We are very connected to nature, and forget it while living in big cities chasing our dreams. We tend to forget that we are a part of it. We are a whole.”

Her view on art’s capacity to transmit messages is clear: “The power of art is huge. People listen to music to relax or entertain themselves, so they reach for it willingly. That’s the starting point. Art is a tool to tell a story. It’s the artist’s responsibility to choose the story wisely.”

Mia believes that the world needs to hear more stories about the environment and how to reconnect with it. And that, when it comes to music, messages about what needs to change should be recorded more often. Nevertheless, she is optimistic about the future of conservation.

“I can see the good things that are happening around the environment, the great work that is being done. We see problems, but also how to solve them. I think we are going in a good direction.”

“Before you physically experience something, you first have to envision it in your head.” 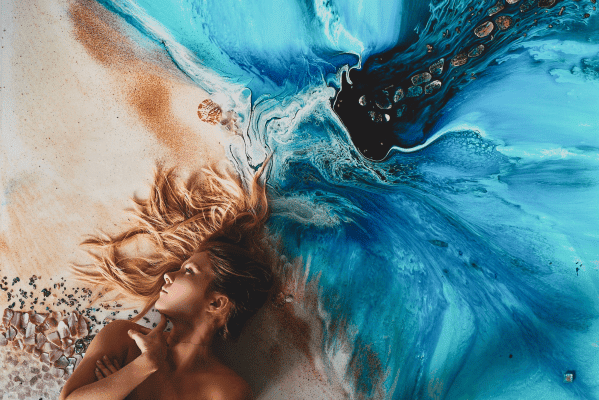 Marie Antuanelle lying next to one of her pieces, created using “Liquid Glass” epoxy resin.

Marie grew up in the middle of Russia, with no ocean in sight. Her grandmother, however, lived close to the Black Sea, and during her childhood, she would spend the summers with her.

“For me, it was a symbol of endless possibilities,” said Antaunelle. “I could run free and wild, and the ocean became a symbol of that.”

Those summers were also the birthplace of her creativity. She recalls many stories of the time they spent together in nature, creating. The ocean is connected to all of them.

Years later, she left a successful corporate career in Russia and moved to Australia to follow her dream of living close to the sea. She had been captivated by the lifestyle of those who lived there: “not focused on making money, but on experiencing life here and now.”

“It took a lot of courage”, she recalls. “Back then I traveled a lot, and whenever I chose a destination, it would be close to the ocean. I realized I felt alive there.”

It was when she moved to Australia that she decided to make art her career. 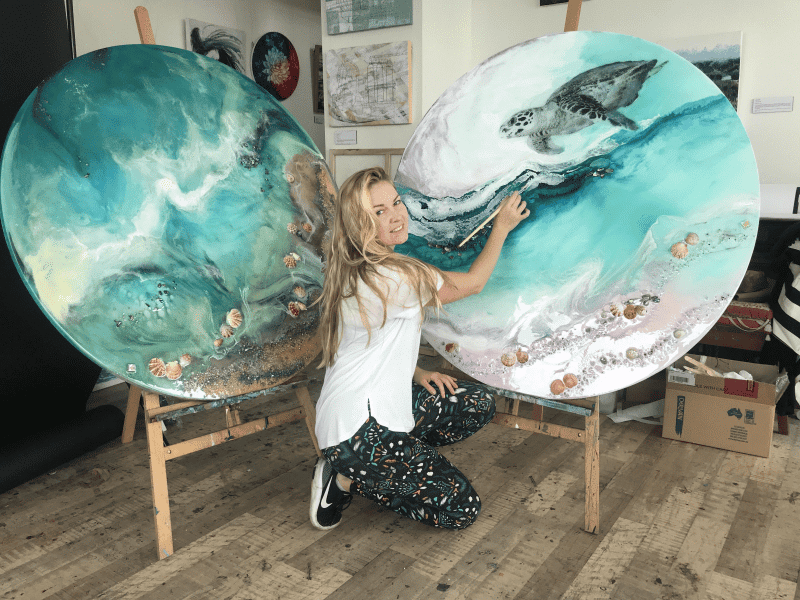 The artist (Marie Antuanelle) working on her “Ocean Portals.”

When she works on a new piece, she’s always conscious of the message she wants to convey with it.

“At the moment, many messages out there focus on telling people what not to do”. There are images of beaches full of trash and marine life choking on plastic, shared to have an impact on people. But Marie believes that what we need for real change is a vision of hope.

She works from the idea that positive messages will register better in our subconscious minds, and that’s how she frames her art.

The approach is to create a vision of what the ocean and coastal ecosystems would look like if they were not polluted or surrounded by urbanization. She takes us on a journey, years back in time, to when touristy beaches were clean, deserted, raw, so we can envision and dream of a future in which returning to this state is possible.

“The idea is to reverse time so they can reflect on the fact that wild, natural places on our planet are getting rarer,” she said. “We need to think about what we are leaving for future generations”.

Her creative process begins with meditation. She visits a beach and pictures it without a trace of contamination or human presence. Then, she collects stones, sand, driftwood, and crystals to incorporate into the piece. They keep the place’s energy. This practice of collecting and integrating different materials comes from her Russian heritage, she explains, as they work with a crushed stone painting technique there.

The idea to begin using art to inspire ocean conservation came from repeated visits to the island of Gili Trawangan, in Indonesia. During one of these trips, she spotted a field full of trash and plastic residues in the heart of the island, and it dispirited her. “I would like my daughter to see Bali one day the way I was able to see it. The realization that our children won’t be able to enjoy these places unspoiled is disturbing.”

To Marie, the key to art’s potential to transmit conservation messages lies in its power to connect with people intimately. She adds: “If the energy of the artwork resonates with a person and their background experiences, they will try to learn more about it; that’s how you convey a message.”

She recently donated a piece for an exhibition hosted by ‘Explorers Against Extinction’ in London to bring attention to a conservation project in Noosa, Queensland. By using real shells and rainbow quartz, she represented a field of oyster shells, once overharvested, that is now being repopulated. She plans to continue in this direction with her art.

“My work is for people to understand that nature is beautiful and amazing and that we are destroying it for superficial things.” 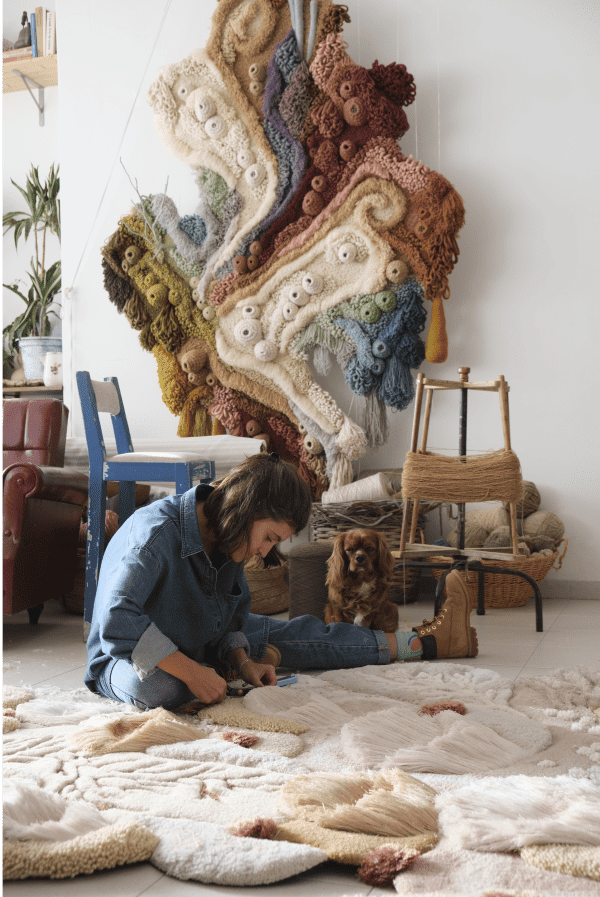 Vanessa carving one of her pieces created with the hand tufting technique. The carving (sculpting) is the last stage before completion – Salinas, 2022.

Vanessa grew up in Albufeira, Portugal, next to the seaside, where the ocean plays an important role in the city’s economy. The ocean’s decay over the years was surely a global issue, but it had a particular impact on her surroundings, too.

When she was young, she would take frequent trips to the Caribbean. As the years went by, she observed that the corals there were visibly turning white. This realization became the source of inspiration for one of her most popular pieces, “Coral Garden”.

When she began to create it, she wasn’t fully aware of what it was going to turn into. In her subconscious mind, she saw coral reefs. But it wasn’t until she was finished with the project that she realized the piece was a representation of coral bleaching. The piece masterfully shows this deterioration by using lively colored yarns, which then fade progressively to white.

Since then, her artwork kept focusing on the message behind: “This is what is happening to our ocean. Coral, which is a big pillar to ocean life, is dying out.”

There’s another factor behind her activism; to give visibility to coral bleaching events. Vanessa studied Fashion Design in Lisbon and, in doing so, realized that the fashion industry was not what she expected. She found that the way fast fashion works clashed with her values. She explains:  “The timeline is so fast: when something’s trendy in one part of the planet, it’s not on the other anymore, and that creates a lot of trash.” 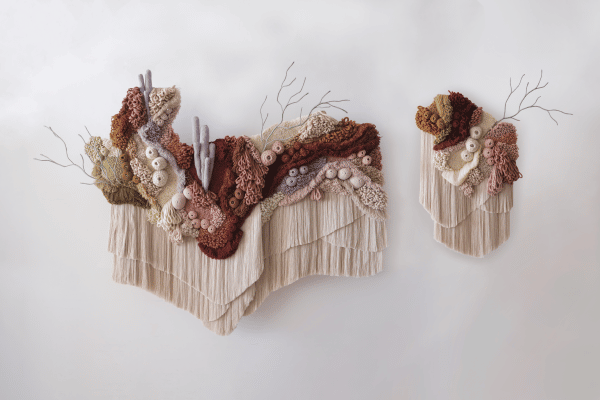 She began working with recycled textiles.

“’Coral Garden’ shows what our consumption habits, when it comes to the textile industry, can cause. It represents the effects of waste and how people don’t try to reuse and recycle, but immediately throw it away.”

People are not paying enough attention to their actions. As an example, she explains how it’s common to buy clothes from big fast fashion brands like Primark without questioning why the prices are so low. “We are giving money to these industries, giving them the opportunity to pollute.”

Vanessa believes that art is the best way to transmit messages because people naturally tend to seek beauty. We want to be inspired. And the intention behind her artwork is this. “My work is for people to understand that nature is beautiful and amazing and that we are destroying it for superficial things”.

But she is hopeful about the future. “I think people are always trying to improve and understand. We grow up in a certain way and are not aware of our actions’ consequences. However, when other people point them out, we can then decide to change. It can be hard, but it’s possible. And it’s important to be consistent in trying to pass that message.”

These three accounts have a common understanding beating like a pulse behind them: we need nature and nature needs us. By portraying their own passion and personal connection with nature on a canvas or in lyrics, these artists channel their feelings to those who watch and listen, allowing them to envision a new reality and new ways of doing things. A seed is then planted in the audience’s minds: what truly matters is out there, the place where we belong is Earth, and we must act now to protect it.

Maria García-Juanes is an administrative assistant at Plastic Oceans Europe. She has a background in Business and a focus on Marketing and Communications, she is currently working in that field and living in the Netherlands.