Meet the Filmmakers Behind the Award-winning Documentary “Against the Current”

Against the Current is a feature-length documentary that chronicles the journey of South African endurance swimmer Sarah Ferguson, as she attempts to become the first person ever to swim non-stop around Easter Island (Rapa Nui) – a feat she took on to raise awareness about the global crisis of plastic pollution.

In this exclusive interview, we speak to director Tod Hardin and cinematographer/editor Erik Aleynikov.

In other interviews, you have commented on how the film was a collaboration between both of you rather than one which split roles. Could you elaborate on that?

Tod Hardin: Sure, we both have our credits on the film for the key roles we played, but it really is important to say that this was a true collaboration between me and Erik. We both definitely had our hands in just about every job within the filmmaking process, from directing and editing, to producing, story structure and more.

Against The Current is a full endurance swim around one of the most remote islands on earth in order to highlight plastic waste. It’s an amazing challenge, but how did the story come to pass?

Tod Hardin: It really starts with Sarah Ferguson, an amazing open water endurance swimmer and ocean conservationist from Durban, South Africa, who we already knew but who was looking to undertake a new endurance swim to raise awareness about plastic pollution and the need to protect our oceans. The Plastic Oceans team in Chile and Sarah started to have conversations about possibilities and Rapa Nui (or Easter Island) came up, and it proved to be the perfect fit, because of the fact that it is really an iconic location, known by many people around the world for their Moai – stone statues of large heads. Additionally the distance around the island was the right for a swim like this, because although there are longer open water swims, the conditions and the currents made this a massively challenging swim. And so we decided to go for it, bringing together a team from 4 continents and 6 countries in order to make it a reality. 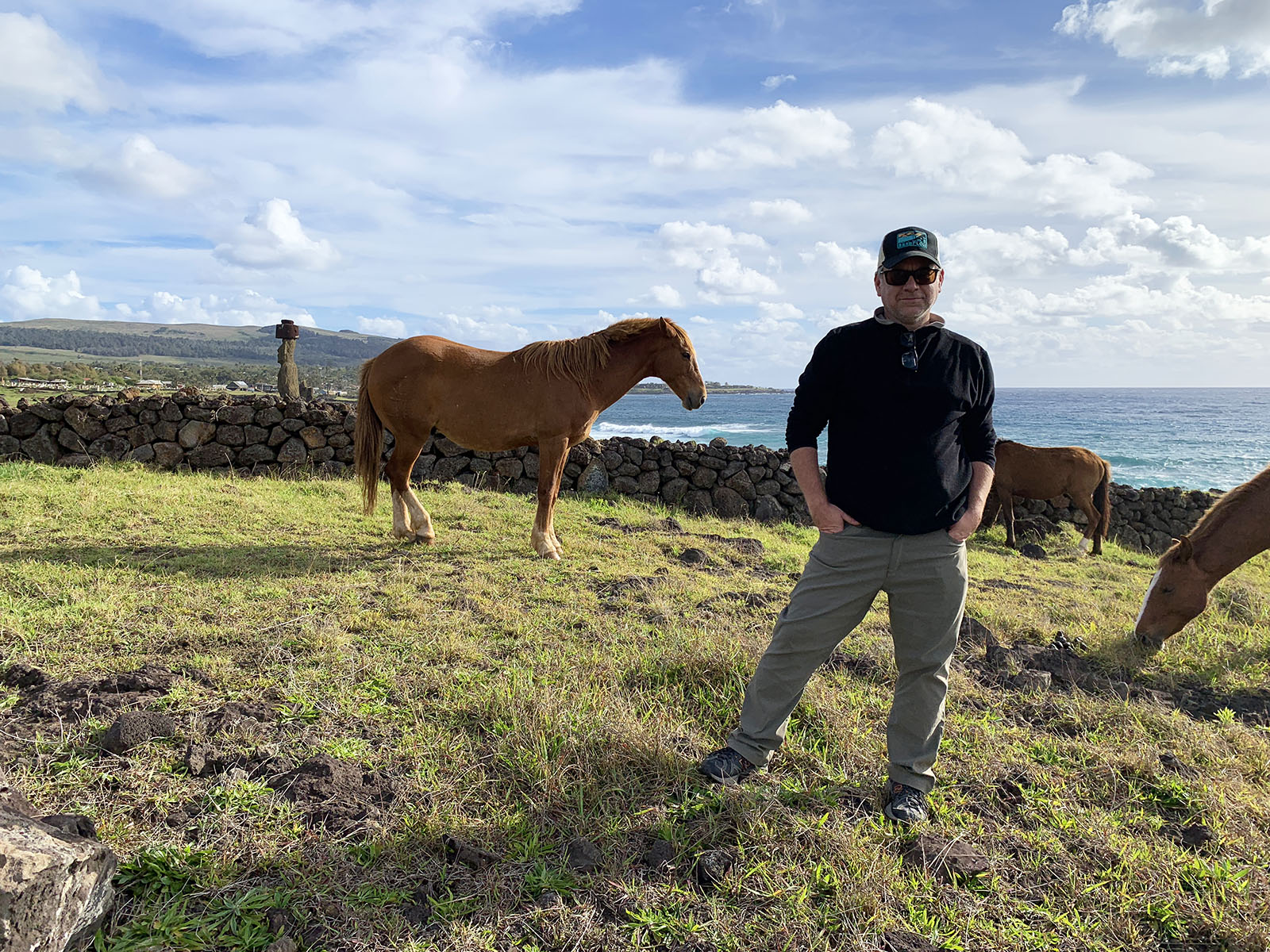 No filming process is straightforward, but the logistics for Against The Current must have been doubly so. What were your main difficulties and concerns during the process?

Erik Aleynikov: The most challenging thing was the lack of understanding of what was going to happen next. Basically we didn’t know how the story would go. Sarah could succeed or she could fail. That’s why it was difficult to move the story forward by ourselves. We just had to wait and capture what happened in real time.

Tod Hardin: If you’re making a documentary about a historical event or figure, you already know your beginning, middle and end. But that’s not the case when filming something that is in the present. Although we were pretty sure that the primary storyline would be Sarah’s swim, it was a story unfolding day by day. Would we get permission from local authorities to do the swim? Would the weather and sea conditions shut it down? Would Sarah even manage to complete it?

It’s clear that Rapa Nui has an emotional significance for you. Could you speak to how and why that came about?

Tod Hardin: None of us expected for it to have the impact on us that we now feel. It’s always difficult to explain when you have these special connections to places. Rapa Nui certainly has its own beauty. The culture is amazing to take in and the hospitality we felt will always be remembered. We made many friends on the island and felt fully embraced by the community. It just all seemed to happen organically and was a really special experience which has stayed with us. It’s a place I certainly hope to go back to multiple times – and I would love to take people who are important to me there because I think it’s a place I would want them to experience.

Of course we humans learn and grow from storytelling, and often there is an identifiable figure at the heart of these stories. Did you choose Sarah Ferguson as the point of focus, or did she choose herself in a way?

Tod Hardin: We always knew that Sarah was going to be the focus of our story. The thing to remember is that we didn’t go to Rapa Nui to make a feature film. We went there initially to simply shoot footage to create social media videos in support of our Swim Against Plastic campaign. However, Sarah being such an empowered, commanding, intelligent, and beautiful woman who was embarking on something which had never been accomplished by any human being, made it obvious that there was a story there on a grand scale – and that she was certainly the lead story. 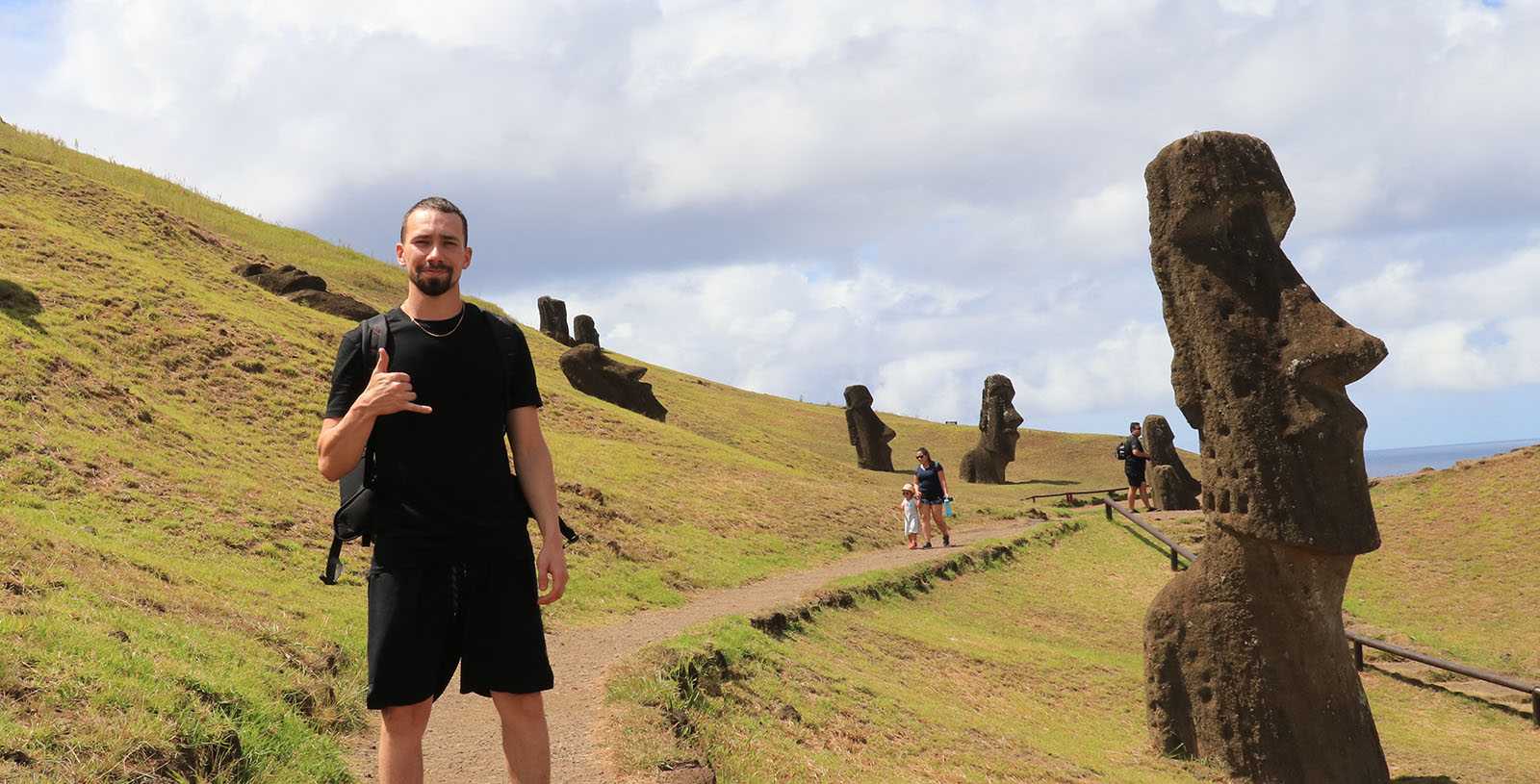 Erik enjoying some time with the Moai of Rapa Nui.

The story you are telling is unique, but of course plastic is a real world problem. What is the message you would hope filmgoers would take from the viewing?

Erik Aleynikov: I think the most important message that we were trying to convey is that people should reconsider their choices as consumers. Each of us should make a small change towards minimizing plastic use in our daily lives. I, for example, started going shopping with my own bags so that I don’t have to buy a new plastic bag every time I go shopping. I also stopped using straws and bought some biodegradable garbage bags.

Tod Hardin: I would also look at the more subtle messages in the film. Sarah’s story is one of female empowerment and overcoming roadblocks in life. This wasn’t just another world-class athlete taking on a major physical challenge, but also the story of a woman who went through a stretch in life where she was unsure of herself, felt a bit lost, and experienced depression. She overcame that. She found her calling and I believe stands as a really great role model for many out there that might be going through one of those periods in our lives where things just aren’t syncing up.

Against The Current is now showing in film festivals internationally. How is it being received by audiences and critics?

Tod Hardin: You know, it’s been great. I’m always my own worst critic, but overall the response has been very positive. Is it a work of art? Probably not, but it’s a solid story and a real film about an important thing, and that makes me so proud. We’ve been featured in over a dozen festivals now, and won three awards so far – two for best documentary and one people’s choice award as best film at the Santiago Mountains Film Festival. It has truly exceeded my expectations and I couldn’t be happier with it. As far as what industry folks are saying, we have had some really nice comments, but my favorite is maybe  Samantha Dols, Programing Director of the Washington West Film Festival, who wrote: “Not only does the film wonderfully capture a compelling story of human perseverance, it also explores very tangible environmental issues that need our attention.”

What is it about film that speaks so powerfully for you both?

Erik Aleynikov: Simply put, it’s amazing how beautiful our planet is and that’s why we have to protect it. Film as a medium is the best place to demonstrate this to people.

Tod Hardin: I think film’s ability to engage audiences has always far outpaced any other medium. I love the written word and reading books, but there is something about film which has always engaged me far more than any other communication outlet. And even though we have moved a bit away from going to the theater and into an online experience, nothing has really changed, in that the moving picture is still king. Film’s ability to put the viewer into a story and feel more connected to it, makes it more powerful than anything else.

Now that Against The Current is out there, what is next for you in terms of what might be termed activist storytelling?

Tod Hardin: I’m a producer on two upcoming film projects, the first of these is The Erie Situation which will be out in the next couple of months. This film tells the story of toxic algae blooms in Lake Erie, which is an international problem on almost every continent – a problem primarily caused by the irresponsible practices of big agriculture. The film certainly tells the story from the perspective of a local community, but it’s one that hundreds of communities around the world are experiencing today. The blooms are not only detrimental to local economies, but it’s believed they are also causing numerous health issues for humans, pets and wildlife.

The second piece is Cutting The Line, a film that is in production right now, with a release date sometime in 2022. We’re working on it with the dynamic duo from Now Now Media,  Alan van Gysen and Will Bendix. It tells a really important story and I think will resonate with audiences for a few reasons. First, it deals with cute cuddly seals in southern Africa which are suffering horrible injuries and often very slow and agonizing deaths at the hands of plastic pollution, particularly industrial lines from the fishing industry. The story is focused on the amazing work of Ocean Conservation Namibia, an NGO that has untangled hundreds of seals, rescuing them from certain death. 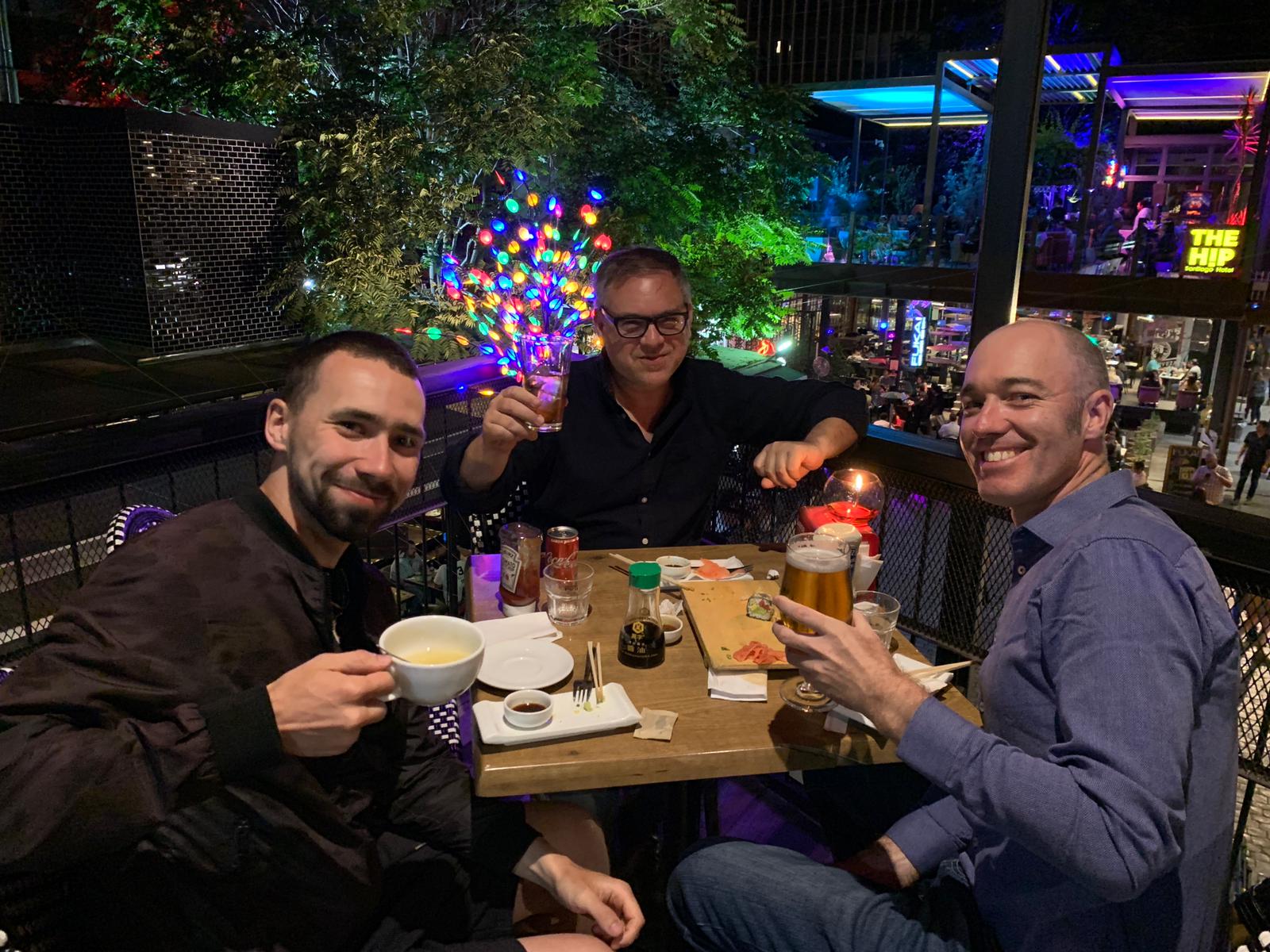 Against The Current will next be seen at the Santa Fe Film Festival, where it is screening on February 5. You can learn more about the film at AgainstTheCurrent.movie. The Erie Situation will start its festival run this spring. Visit it’s official website at TheErieSituation.com.

Interview by Jon Bonfiglio, Managing Editor of Plastic Oceans International’s original written content. He is also part of the socio-environmental organization, Ninth Wave Global, and is a longtime print and broadcast journalist.