Ban Officially In Place for Such Items as Cutlery, Food Containers, Balloons, Cups, Straws and More

On New Year’s Day, after nearly two years of preparation, Mexico City became one of the largest municipalities in the world to ban most single-use plastic items.

As expected, this has been a bit controversial, with various discussions about its pros and cons and whether we should move towards biodegradable products or think about the negative impact on thousands of jobs dependent on the plastics industry.

But before getting into all that, you have to immerse yourself in the context of this legislation and what it means for the most populated city in North America.

Despite the discontent that exists regarding the timing of this law, it should be noted that the reform to the Solid Waste Law of Mexico City was carried out in January of 2019. The first thing to be banned were single-use plastic bags at the beginning of 2020. The ban on other disposable products was programmed to come into effect January 1, 2021, with the purpose of giving the industry time to innovate and move towards plastic-free alternatives.

Mexico City’s Ministry of the Environment states that what this reform prohibits is “The commercialization, distribution and delivery of, (…) (plastic products) designed for disposal after a single use, except those that are compostable.”

These are the products, made entirely or partially out of plastic, that have been prohibited: 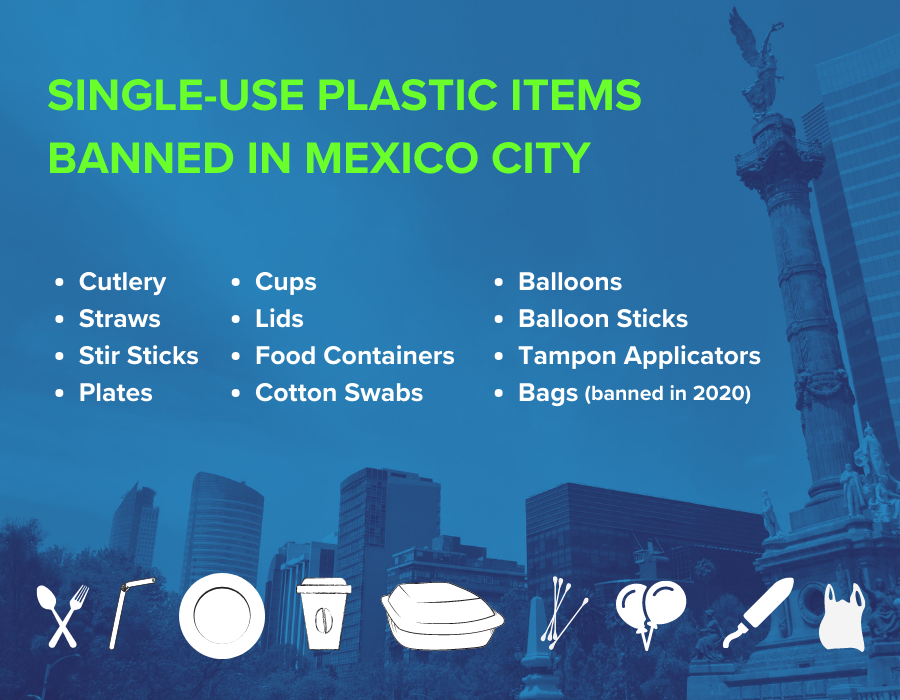 This has been a very important advance in terms of regulation of single-use plastics since, at that time, it was the first legislation in Mexico that promoted the elimination of various items whose recycling rate is practically zero, such as balloons (Alianza México sin Plásticos 2019).

Now, it is worth clarifying exactly what the term “compostables’ means, since those products continue to be legal in Mexico City. Basically, compostable plastics are biodegradable plastics that degrade under certain specific conditions within industrial composts that allow their decomposition (Green dot Bioplastics, 2020). This means that they will not disintegrate if we simply bury them in our garden. In fact, these materials, according to international standards (ASTM D6400 in the US or EN 13432 in Europe) must disintegrate in 12 weeks and biodegrade at least 90% during 180 days within industrial compost (Green dot Bioplastics, 2020). But surprise surprise … Mexico doesn’t have these industrial composts. What will happen to all those “compostable” products that cannot biodegrade unless they are under certain conditions?

In the same way, bio-plastics are not necessarily biodegradable in a reasonable period of time and, despite being made of organic matter, they can have other additives such as oil. Therefore it is very difficult to determine if these plastics will end up affecting the environment or not. So they end up being another distractor, that could appear to be the solution to all this problem and avoid us the pain of being responsible for our consumption patterns; where, in addition, with so many interests involved, there is no gap to an easy solution. 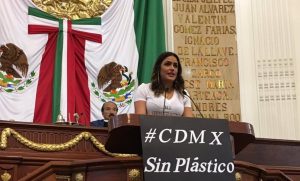 On the other hand, the simple act of enacting a ban also arouses adverse opinions. It is widely argued that a ban is very harsh for plastic companies whose income depends on these materials. However, this is how markets open doors to any product without us being really aware of its impact, until science shows the effects that these can generate. This was also the case with the ban on Dichlorodiphenyltrichloroethane (DDT) in 1972, a pesticide that was proven to cause serious damage to the environment. Surely at the time this had a great direct impact on its manufacturers and the jobs they generated. But until when are we going to justify the immediate economic benefit over the poisoning of the natural environment from which we eat, drink and breathe? What we do to the environment, we ultimately do to ourselves.

We must put aside the short-term benefits and think about the long-term benefits. Although the reform should be clearer, for example with the specific management of compostables, “no regulation” is no longer an option. It is neither possible nor acceptable that as a society we continue to take advantage of legal loopholes for someone else (in this case the environment and our own health) to pay for our negligence.

Finally, this is a movement that has been generated by the demands of society, a grassroots initiative that championed the cause and has begun to pressure both the private sector and governments. This has occurred in many different countries. In fact, this awareness is arriving several years late in Mexico. This is not a call to name and shame the industry, it is a call to raise awareness, to accept the impacts demonstrated by science and reinvent ourselves as a consumer society. A call to innovate and adapt to new parameters of life.

Valentina de Leo is an International Relations graduate, highly committed with environment protection and the socio-political changes that are necessary for the planet conservation. Currently she’s part of Plastic Oceans Mexico´s communications team at social networks management, with the task of raising awareness, informing and presenting alternatives to plastics use. She is based in Mexico City.