Plastic Is Killing the Camels of Dubai

Even in the deserts of the Arabian Peninsula, plastic pollution is not just apparent, but lethal – as detailed by the recent discovery of an alarming plastic problem among the desert ecosystem’s most iconic animal — the camel.

In investigating over 30,000 dead camels in the United Arab Emirates, near Dubai, researchers Dr. Marcus Eriksen, an environmental scientist, and Dr. Ulrich Wernery, a veterinary microbiologist, discovered 1% of camels died due to the ingestion of plastic that amassed over time in their digestive tracts. Camel remains display compressed tangles of plastic items, mainly plastic bags, objects the pair have dubbed “polybezoars,” which kill camels slowly by blocking their intestines, tearing at internal organs and creating conditions for bacterial infection. 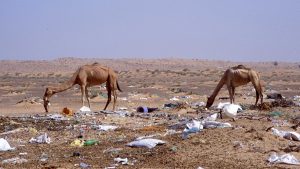 “It’s a slow death,” Eriksen said. His words, in some sense, are a metaphor for the global crisis, as plastic waste builds up over the years and fills the planet, enduring and non-degradable.

It’s a well-documented fact that seaborne plastic pollution has wormed its way in the digestive tracts of marine life and seabirds, contributing to the multifactorial threats that endanger animal life in and around the world’s oceans. Plastic pollution, however, we now know, is not only killing maritime creatures — it’s killing mammals right across the world, many of them iconic as the camel in their own right. 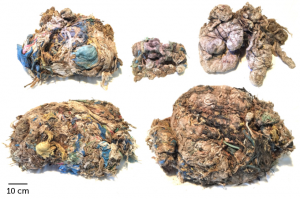 In the Arctic, for instance, reindeer are found strangled by fishing nets and rope. In Zimbabwe, elephants foraging through an open garbage dump near Victoria Falls have died after consuming plastic they cannot digest. Plastic waste left by tourists in Japan’s Nara Park is consumed by wild deer, who later die due to the inevitable complications this causes. Reports of animals killed due to plastic pollution pile onto one another, highlighting the increasing consequences of a modern society built upon plastic consumption.

The pervasive nature of plastic waste makes it so even the most beloved animals in the most remote of places fall victim to its eternality. As plastic production is set to quadruple by 2050, according to a report by the Norwegian Polar Institute, we can only expect to see more animals meeting their ends in a tangle of plastic waste if product redesign and waste management does not improve. 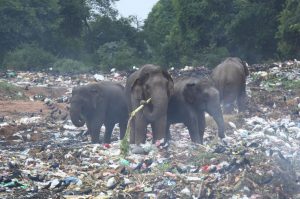 Elephants dining in a pile of plastic waste.

The encroachment of human development upon wild spaces, too, will only augment the problem. After all, the garbage dump turned elephant graveyard in Zimbabwe only exists to serve the nearby resorts, microcosms of a global tourism industry that encourages the dispersal of travelers across the planet and leaves a tide of plastic in its wake. A tide that endangers the precious ecosystems and their wild inhabitants.

Tourism is far from the only industry guilty of inundating this planet with plastic. In fact, plastic waste is hardly absent from any globalized industries, though some such as the packaging, fishing, and textile industries contribute a disproportionate amount to the issue.

The enormous quantities of plastic (sourced from fossil fuels) utilized by these industries wind up in our deserts, our forests, our oceans, where they ensnare, obstruct, and lacerate all manner of creatures. Or Mother Nature weathers them down into tiny pieces — called microplastics — that bioaccumulate throughout the food chain. While plastic pollution is often considered a problem of sea animals, no creature is immune to it. Not even humans, who recent estimates say ingest some 40 pounds of plastic throughout their lifetimes, the health effects of which are not yet well understood.

“Our human footprint is an unforgiving force that not only threatens all other species, but also our own human health,” said Tod Hardin, Chief Operating Officer of Plastic Oceans International. ‘It’s easy to point fingers, and often valid to do so, but let’s not be afraid to also point those fingers at that person looking back at us in the mirror. We must all bear some responsibility for this mess and together be part of the solution.”

Complicating the matter are unforeseen crises that add weight to the plastics crisis, such as the COVID-19 pandemic. Around the world, 129 billion masks and half that amount in plastic gloves are used each month. Where these plastic vestiges will end up is still unknown, but one can be certain some may end up in the stomach of a camel in some windblown desert, a whale in the midst of the ocean, or a seabird on some isolated speck of land.

The issue of plastic pollution is a monumental problem tied up in discourses of globalization, climate change, and imperialism, among others, that is having untold impact on the living things of this planet. Whether it will entangle us, choke us, or crush us does not matter, as it is a problem of lethal proportion. The answer to the problem is simple, though the execution and elimination is more complex, and humans have a learned fetish for plastic items that we are reluctant, or unable, to surrender.

Henry Haney is an environmental journalist from North Carolina. His work focuses on points of conflict in the current Anthropocene between humans and their environment, identifying and highlighting strategic points of potential resolution.