Dissolve Does Not Mean “Disappear”

What comes to mind? Well, “poly” alludes to ‘many’. “Vinyl” conjures images of musical records. “Alcohol”, well, we all know about alcohol. In reality, polyvinyl alcohol (PVA), and it’s corresponding blends such as PVOH, is a material being used heavily in the textile industry and it’s now becoming more popular in our homes and potentially in the environment.

If you’ve ever used or seen a laundry/dish detergent pod, you’ve seen PVA. It now serves as a dissolvable coating for detergent, allowing the user to put pods directly into the washing machine or dishwasher. Once the pods interact with water, they dissolve and release the cleaning contents into the load due to their solubility. 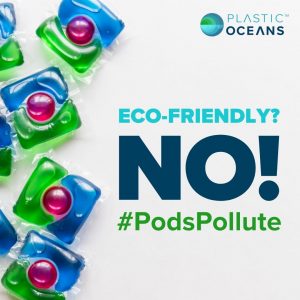 So what’s the problem? Well, dissolve does not mean disappear. Salt is technically soluble in water, but if you pour a bunch of salt in a glass of water, you very much taste it. It’s still there. A quick assessment of PVA ingredients tells us that it is similar to conventional plastics. For example, ethylene, made from fossil fuels, is contained within the chemistry of PVA used in detergent pods. Just because it is soluble in water, doesn’t mean total biodegradability. Here at Plastic Oceans International, we decided to look into this further.

We began by conducting a literature review to see what we could find and the results were scary. Once PVA goes down the drain, the chances of it biodegrading are very low. It requires strict conditions for it to be broken down via microorganisms that are not always present in wastewater treatment plants or in the environment. We also looked at how many pods were used to try to establish how much PVA goes untreated, every year, in the United States. Not good.

This study was recently published in the International Journal of Environmental Research and Public Health. Our preliminary data shows that between ~75% of PVA derived from these detergent pods goes untreated. We’re talking over eight thousand tons of PVA going into the environment, every year, originating from these detergent pods. That equates to 600 million plastic soda bottles worth of plastic, yearly. Because of the water solubility, it’s broken down into very small particles that quickly becomes a solution that can easily pass through water treatment and enter the food chain, working its way up, potentially reaching top-tiered predators, such as human beings. Some groups in the cleaning industry have attempted to discredit our results but our research is based off of the peer-reviewed, published work of accredited researchers, thus we are confident in our findings.

Ultimately, very little is known about how PVA behaves as a pollutant but one thing remains clear, it does not fully biodegrade. Not even close. I had a pretty scary trip to my local nutrition store the other day. I saw a product featuring protein pods that dissolve in water. The coating? Yup, you guessed it. PVA. People are literally drinking it these days…

When in doubt, go for the PVA-free detergent, something in a cardboard container or better yet, make your own. When we read that a material is “biodegradable”, it is critical to understand what that means and if it is truly achieved.