Things Are Heating Up, Thanks to Plastic

If you’ve ever been to the beach and stepped on sand, you know how the temperature can affect the time it takes for you to get in the water. I know I’ve had my fair share of awkward runs to the ocean due to hot sand.

One thing always stuck in my mind about this, how does the addition of microplastics to beach sand affect its temperature? This is important for many reasons, I’ll explain why.

Beach sand is home to a wide variety of organisms that rely on it both as a home and a food source. Although a sandy beach might look mostly uninhabited, that couldn’t be further from the truth. For example, in six samples collected from a beach in Pulau, 82 species of microfungi were discovered1. The bacterial species in beach sand were also reported to be more complex than species found in the surrounding water2. These ecosystems already face a plethora of threats, many stemming from human impact via climate change, plastic pollution, etc. It isn’t just the smaller species either, larger animals living in, on or within beach sand could face up to a 75% loss in species due to sea level rises alone3. Thus, maintaining healthy beaches is crucial for thousands of species.

So how does plastic waste affect beach sand? That’s what one team recently wished to study. Plastics are capable of washing up on any shore, regardless of how far it may be from populations of people. One island, for example, which is thousands of miles from a major landmass, was estimated to have around 18 million tons of plastic littered about4. We are very much aware of the threat that larger plastics pose, from strangulation to malnourishment if consumed, but what about smaller plastics, or “microplastics”, found on beach sand? Microplastics can release chemicals into the environment and are easily ingested, but do they have an effect on the environment itself?

Dr. Jennifer Lavers, an ecotoxicologist from the Institute for Marine and Antarctic Studies at the University of Tasmania, conducted a study to see how the presence of microplastics in beach sand might affect sand temperatures.

“One of the main motivators with the paper was to demonstrate the hazard plastics present in relation to species’ habitats”, Dr. Lavers explained.

This work has massive implications for organisms living in or within the sand, as well as important species such as sea turtles, which are temperature dependent for sex determination (TSD) of their offspring. This means altering the sand temperature directly influences the gender of the young. Dr. Lavers found the presence of small plastics increases sand temperatures by around 2.45 °C5. This is especially dangerous considering even a degree or two can cause catastrophic impacts on coastal ecosystems. 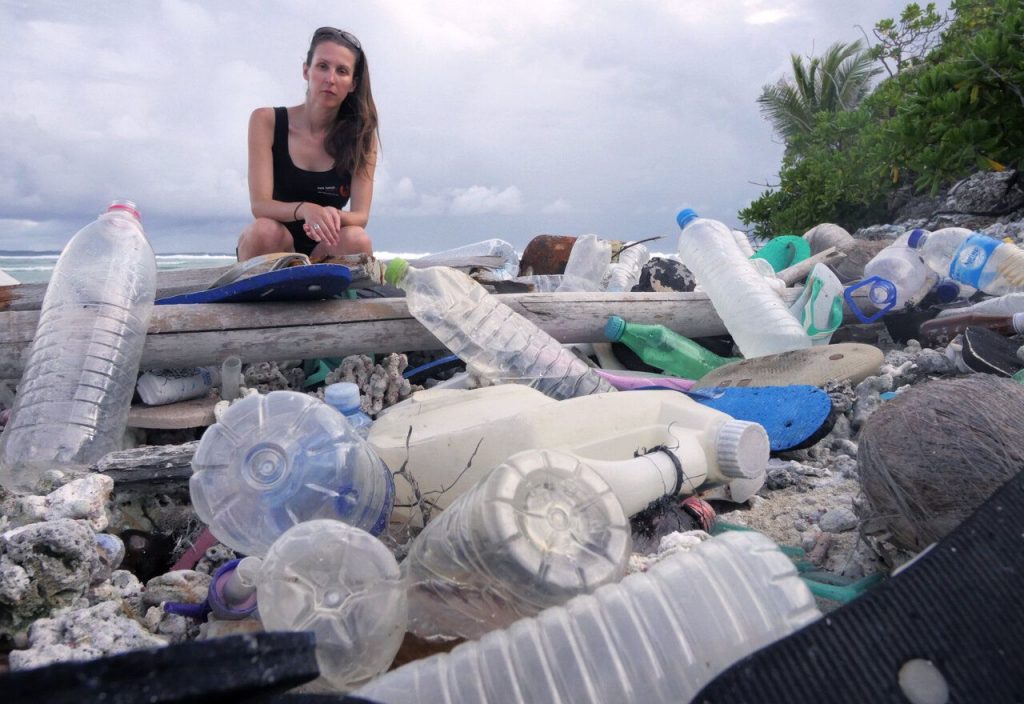 Dr. Lavers pointed out that, “multiple species rely on sandy beach sediments, and most require those sediments to remain within a fairly narrow thermal niche. If that changes drastically, or changes too quickly, it potentially pushes a raft of species out of their thermal envelopes”.

These plastics essentially serve as an insulator for the beach sand and Dr. Lavers doesn’t see that changing any time soon. “There isn’t a lot or any opportunity to remove this plastic waste”, Dr. Lavers pointed out. Thus, it becomes critical to study sandy habitats as a whole to account for all species relying upon them.

“Some (species) have the capacity to move, others don’t. At the same time, many of these same species are also ingesting plastic and/or becoming entangled, so plastics are imposing multiple pressures” Dr. Lavers explained. “Until now, we were only talking about the latter two – impacts on habitats were largely being ignored – for me, this was a huge part of the equation that needed to be factored in”.

Dr. Lavers and her team studied multiple sand plots by counting the plastic pieces contained within while measuring the overall temperature of the plots themselves. The biggest takeaway? The circadian rhythms, or natural temperatures, were being “massively affected by the plastics”6. While more charismatic species, such as sea turtles, have been suggested as a victim of this situation, Dr. Lavers and her team are happy to have studied lesser-appreciated species such as invertebrates. “I’m really proud to work on underdog species,” Dr. Lavers pointed out to me.

So, what’s next? Some scientists believe that plastic pollution does not affect species on a population level, but Dr. Lavers believes this to be untrue and aims to continue to prove this with subsequent research projects. For now, this important study demonstrates what a large effect beach plastic has on the sand temperatures. This poses a threat to a large number of species that rely on beach sand that is consistent with a normal circadian rhythm. Dr. Lavers and her team hope that plastic consumption decreases globally so that less plastic ends up on sandy beaches but until then, this will continue to be a hot topic (literally).

Dr. Charlie Rolsky is Director of Science for Plastic Oceans International. He is also the host of Breaking It Down, With Charlie Rolsky – a YouTube series from Plastic Oceans that simplifies the science, while having a bit of fun. He conducts research at Arizona State University, where he works on marine and aquatic plastic pollution, a major concern within many ecosystems and environments around the world. Charlie worked with Dr. Halden and Dr. Khan on the article the blog post showcases.