During the United Nations Environment Assembly, the UN passed a resolution paving the way for a global binding treaty against plastic pollution

The Heads of State, Ministers of environment and other representatives from 175 nations endorsed a resolution to “End Plastic Pollution” and forge an international legally binding agreement (known as a treaty) by 2024. (Source: United Nations Environment Program, unep.org)

What does it mean?

This is a historic moment because it recognizes the need for multilateral cooperation by governments to address the global crisis of plastic pollution.

With a commitment from so many nations, this agreement represents a global recognition of not only the gravity of plastic pollution but the dire need for a strategic framework to address it.

The global resolution also reflects a positive global response to the amplified voices by scientists, activists, environmentalists and others who have kept plastic pollution top of agenda. 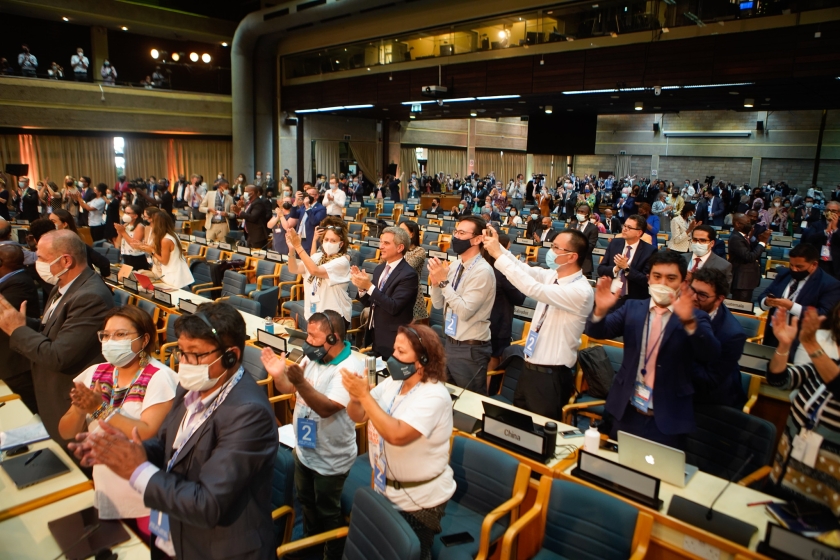 UNEA 5.2 Delegates give a standing ovation upon passage of the resolution.

Why is it important?

The creation of a treaty has the potential to provide the framework to globally scale the reduction of the harmful effects of plastic throughout its entire lifecycle, including its production, design and disposal.

As an example from history, in 1985, countries came together, in response to the largest hole in the ozone layer in history, and adopted the Vienna Convention for the Protection of the Ozone Layer. This provided the framework for the Montreal Protocol to phase out ozone-depleting substances, including chlorofluorocarbons.

We need the global framework that will be developed through this plastic treaty to be put in place quickly to prevent threats like plastic outnumbering fish by 2050.

Though this is a monumental first step, this is only a shared resolution to take the next steps towards creating the treaty. It is important to note that there are no repercussions for not meeting the 2024 deadline to produce the treaty. Therefore, it is critical for us, as global citizens, to ensure this framework is delivered as scheduled. The protocols that will follow this framework will require a concerted effort in education and alignment of community implementation.

It has taken an incredible amount of coordination to have this issue addressed at a concerted international level. This is only the first step of many to achieve our goal of ending plastic pollution.

Plastic Oceans International’s mission to build sustainable communities to end plastic pollution aligns with the objectives of the treaty. We will continue to educate on the circular economy and the lifecycle of plastic to support the transition of communities to align with future global protocols.

Plastic Oceans International has already actively supported the call and development of this treaty since 2021 by participating in the global treaty dialogues and expert panels on the subject.

We look forward to working with all organizations, citizens and companies that make up our communities to align us on this global effort to end plastic pollution.

Julie Andersen is the Founder and CEO of Plastic Oceans International.