On One Of The World’s Best Known Beaches, The Fight Against Plastic Is Taking Shape

Amidst the flurry of activity, a group of volunteers regularly gathers to tackle the litter left on the beach, and to promote a message: we must change our habits now, or risk losing our oceans’ biodiversity forever.

The volunteers are rallied by Clean Up the World Rio de Janeiro, part of the global outreach of Clean Up The World Australia, which was born in Brazil in 2003, when Anna Carrapito, Director of Communications at Amiganca and Instituto Clima, began organizing cleaning efforts on Copacabana beach. At the first event, they were able to gather around 300 volunteers, including divers, who gathered in the famous barrio of Copacabana to take on the rubbish littering the beach, and to educate both locals and tourists on the environmental impact of their actions.

“Since then,” says Carrapito, “Instituto Clima have worked in 600 localities in Brazil, as well as Santiago in Chile, and in Florida, U.S.A., conducting cleanup campaigns and promoting environmental education.” 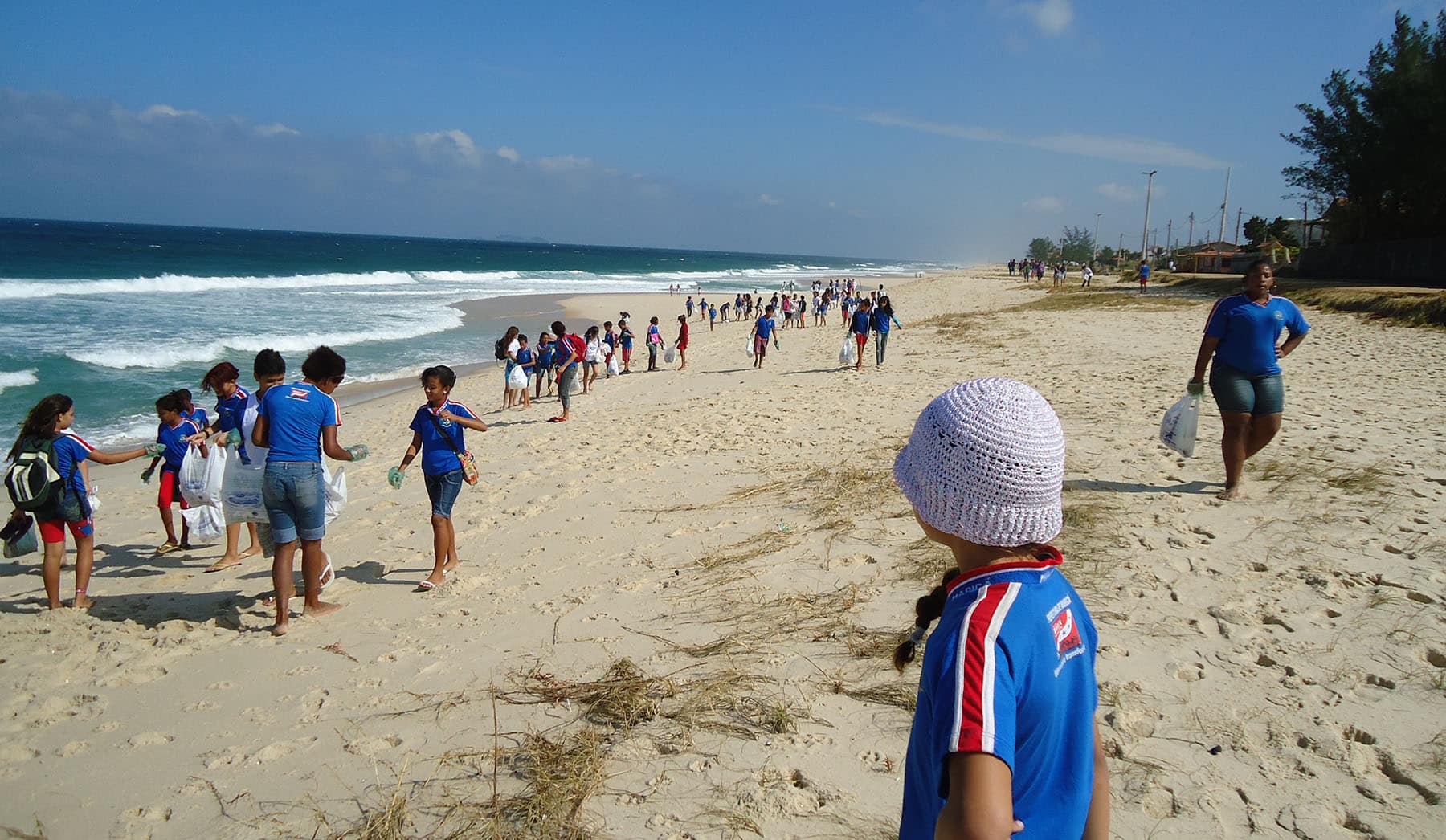 An Instituto Clima beach cleanup at Praia Marica in Brazil.

This year, they have also joined the ever-growing number of communities and partners participating in Plastic Oceans International’s BlueCommunities initiative, aiming to become a part of the world’s leading movement for inspiring global change through local action. You can learn more about their activities in the program HERE.

In many places in Brazil, these changes became quickly apparent for Instituto Clima. In various locations there was a significant downward turn in the amount of rubbish collected by cleaning companies, and in other places, co-operatives of recyclers cropped up in various places, which generate revenue from correctly recycled rubbish. In these cases, the integration of a global drive towards a cleaner planet into the needs of the community has also generated extra income for families struggling to make ends meet, in what is undeniably a successful meshing of social and environmental consciousness.

“Plus,” Carrapito states, “both the environment and the oceans thank us for the reduction in the plethora of rubbish that would otherwise have been discarded incorrectly.”

Most importantly, however, was a clear shift in the habits of the people with whom Carrapito and her team interacted. In part, this is due to Carrapito’s keen awareness of the impact of the media on the perception of the environmental crisis, and what this means in terms of making a genuine difference in your local area. As such, Carrapito notes that the growth of the Clean Up the World event in Brazil after 2003 was largely facilitated by an increase in educational campaigns across television and radio, which generated fresh interest every year, and saw the yearly clean-up become an institution of the Copacabana calendar.

Moreover, the team were invited to curate the January 2022 Rio Innovation Week – an innovation and technology event that takes place annually in January. Through the creation of a sustainability area, called the Clean Up the World Platform, the team had a unique opportunity to spread their cause globally through speeches, educational videos, and photos of their work. It was, as Carrapito puts it, “very special.”

“Special is right,” says Mark Minneboo, Regional Director of Latin America for Plastic Oceans. “Anna Carrapito and her team are drivers of change, in the amazing work that they do, day to day, but also just in who they are, and how people see them. They are uniquely inspiring. And BlueCommunities is nothing if it isn’t about taking people along with you.”

As with so many things over the past two years, however, the onset of the pandemic saw the number of rubbish collections that Carrapito and her team were able to undertake decreased significantly, whilst the amount of rubbish – particularly in the ocean – increased.

Given this, Carrapito stresses the absolute urgency for reversing the damage wrought by the rise of single-use plastics during the pandemic, and the need for global educative action, and resources, to minimize our environmental impact. We can combine our strengths to undo the damage that we have done, she argues, but we must do it right now.

The partnership with Plastic Oceans, then, could not have come at a better time; as different nations grapple with a number of unique challenges, particularly in the wake of the pandemic, it is key that communities across the globe join hands, acting locally to change things globally.

“We recognise that every nation faces different challenges,” says Carrapito, “Brazil is brilliantly unique beyond words, and it gives us great pride to stand alongside a global community of people committed to making a difference.”

As Carrapito astutely points out, there is no one-size fits all solution to ensuring that the global plastic pollution crisis is quashed before it is too late. Every place, including Rio de Janeiro, must overcome its share of hurdles, but it is how we collaborate that is important.