“We believe that localized efforts and relationships are the building blocks for creating socioeconomic and environmental change that benefits the entire planet,” said Julie Andersen, CEO of Plastic Oceans International. “Working locally has always been at the core of what we do, but this provides a more focused and effective way of doing so, allowing for a broader impact of the work being done.” 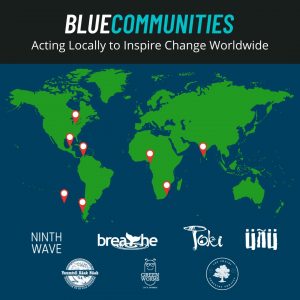 A BlueCommunity is a shared geographic region of any kind or size (village, town, city, province), but one whose local culture and economy are driven by the waterways they inhabit –  whether it’s an ocean, sea, lake or river. Plastic Oceans seeks out local partners that already have existing socio-environmental programs that are making a difference with their citizens.

“We don’t look to come in and impose our projects and way of doing things,” said Tod Hardin, Chief Operating Officer of Plastic Oceans International. “Instead, we want to enhance what’s already working. As the old saying goes, don’t try to fix what isn’t broken. For us, it’s instead about learning from our partners and using our global resources and experience to create a larger impact and give these local efforts a worldwide voice.”

In addition to offering mini grants, guidance and various other resources, a major value to the BlueCommunities initiative is connecting like-minded organizations. It’s an opportunity to share ideas, support one another, learn from each other and to give local projects a chance to impact communities beyond their own. This was never more evident than in the success of the pilot program in Campeche, Mexico.

Jon Bonfiglio, of partner organization Ninth Wave Global, in Campeche, offered these thoughts: “The joy – and a meaningful joy it is – of the BlueCommunities initiative is that it reminds us that we are not alone in this. That we have brothers and sisters across the water who have our backs, and that we have theirs; that we are many, that we are strong, and that together we can make a difference.”

Plastic Oceans International has an ambitious goal of onboarding over 250 communities and 1,000 members by the end of 2022, which they believe will be able to impact at least 10,000,000 people around the world. Although membership has no cost, there is an evaluation process for those that wish to join. For more information, please visit PlasticOceans.org/BlueCommunities.

A US-based non-profit organization working to end plastic pollution and to foster sustainable communities worldwide. We operate with the belief that we can and must act locally in order to create change globally, and we do so through four program areas: Education, Activism, Advocacy and Science. Projects are carried out by both our global entity and local branches in Canada, Chile, Mexico, Europe and the Great Lakes region of the U.S.

Click HERE to learn more about the BlueCommunities initiative.